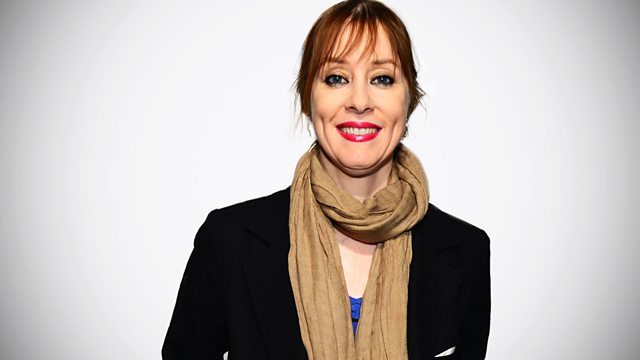 Suzanne Vega; The Poetry of Sex; Being a man in the 21st Century

Suzanne Vega plays live and talks about her new album. What's black and white and contains threesomes, elephants and two Daniel Craigs? Plus a treat from the Woman's Hour archive.

Singer-songwriter Suzanne Vega first came to fame in 1985 with her track Tom's Diner, and later hits like Luka and Marlene On The Wall. Her new studio album, Tales From The Realm Of The Queen Of Pentacles is her first new material in seven years. She'll be performing Fool's Complaint from the album, and talking about her songwriting career, almost 30 years on from that first hit.

From the people that bring you Women of the World - a new Festival all about being a man. What does it mean to be a man in the 21st century. We look at the work of Russian journalist Anna Politkovskaya ahead of next week's Drama based on her life - what's it really like reporting from a warzone. Plus What's black and white and contains threesomes, elephants, and two Daniel Craigs? Tune in and find out.

See all clips from Suzanne Vega; The Poetry of Sex; Being a man in the 21st Century (4)

The Being a Man festival starts at London’s Southbank Centre this Friday. Men of all ages and from different walks of life will be coming together to discuss what it means to be a man today. It’s the first time the event has been held and the idea has come from the people who organise the women of the world festival and Jude Kelly the Artistic Director of Southbank Centre. So why do men need a special event to discuss masculinity?

Singer-songwriter Suzanne Vega first came to fame in 1985 with her track Tom’s Diner, and later hits like Luka and Marlene On The Wall. Her neo-folk style and storytelling in her lyrics won her many fans – her first three albums were hugely successful, and Tom’s Diner went on to be used countless times by hip-hop artists. She now has a new studio album, Tales From The Realm Of The Queen Of Pentacles – her eighth, and her first new material in seven years - and is here in the UK to play a string of live dates. She joins Jenni to play Fool’s Complaint from the album, and to talk about her songwriting career, almost 30 years on from that first hit.

Tales from the Realm of the Queen of Pentacles is out next Monday on Cooking Vinyl, and Suzanne Vega plays a live dates across the UK from tomorrow, including the Radio 2 Folk Awards on 19 February at the Albert Hall in London.

THE POETRY OF SEX

The Poetry of Sex is published by Penguin Viking on 30th January 2014.

According to the ‘Committee to Protect Journalists,’ last year over 200 journalists were imprisoned and seventy killed – many of them reporting on the war in Syria.  Others are still missing.  Next week, we’ll be broadcasting ‘Anna’s War’ in the Woman’s Hour drama slot. It’s based on the life of Anna Politkovskaya, the Russian journalist who was murdered in 2006. The series covers five key events in her life and in particular her work covering the war in Chechyna from 1999 to 2006. And in the new Woman’s Hour Archive Collection you can also hear Jenni’s interview with Anna Politkovskaya from 2004 about her why she continued speak out about President Putin and the situation in Chechnya, despite receiving death threats.  Joining Jenni to discuss reporting in war and conflict zones are Caroline Wyatt, BBC defence correspondent and Lindsey Hilsum, International Editor for Channel 4 News, author of  ‘Sandstorm; Libya in the Time of Revolution.’