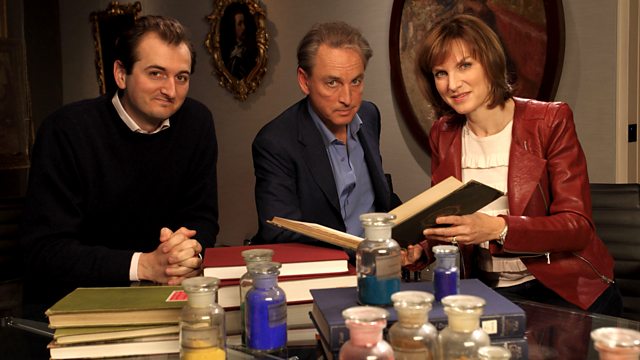 Fake or Fortune? Series 3
Episode 1 of 4

Art series with Fiona Bruce and Philip Mould. The team must convince a panel of experts that a scriptwriter's picture is an original by the French artist Edouard Vuillard.

Scriptwriter Keith Tutt fell in love with the work of French post-Impressionist painter Edouard Vuillard in his school art class. When a large oval picture of a Parisian café scene said to be by the artist appeared in a provincial auction house, he gambled his savings on it - even though it doesn't appear in the official record of Vuillard's works. To prove it, the team will need to convince some of the most demanding art experts in France... and they've got a tricky history with Fake or Fortune.

The quest for evidence starts in Geneva, where Philip and conservationist Aviva Burnstock compare Keith's picture with a huge Vuillard work called Le Grand Teddy, painted for a French café in 1919. Can science prove that the two pictures were painted using identical materials?

Fiona picks up the provenance trail in France and Holland, unearthing tantalising clues about the picture's past, while a meeting with a pair of British antiques hunters dramatically expands the scope of the investigation. Could there really be another missing oval?

Once the team has marshalled all their evidence, it's time to seek the approval of the Wildenstein Institute in Paris, the body who notoriously rejected a highly credible Monet in the first ever episode of Fake or Fortune. Have the team done enough to convince them that Keith's picture is genuine?