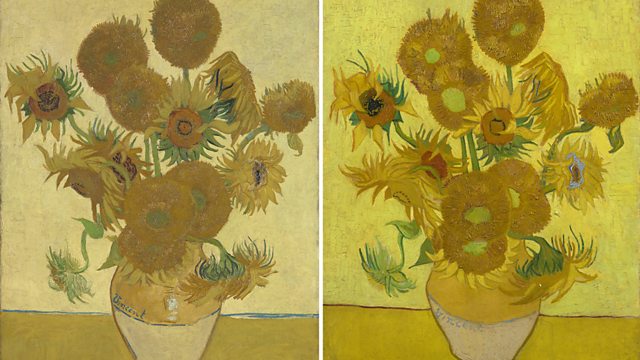 Two versions of Vincent Van Gogh's Sunflowers have been reunited for the first time in more than sixty years. Sunflowers is one of The National Gallery's best-loved paintings and it will be shown alongside another version from the Van Gogh museum in Amsterdam. Art critic Martin Bailey discusses what seeing the paintings side-by-side tells us about Van Gogh's methods, and why the paintings are so captivating.

In the film, Grudge Match, Hollywood heavyweights Robert De Niro and Sylvester Stallone star as old boxing rivals who come out of retirement for one final match. Hal Cruttenden, comedian and recent winner of Celebrity Mastermind - with, as his specialist subject, The Rocky Films - reviews.

Author and political cartoonist, Chris Riddell, discusses his gothic novel for eight year olds, Goth Girl: And The Ghost Of A Mouse, which has won the children's category for the Costa Book Awards. Chris Riddell talks about the overlap between the world of Westminster and children's books, and his love of puns and literary references - including the ghost of a mouse who says "call me Ishmael".

Theatre director, Max Stafford-Clark, former Artistic Director of The Royal Court, talks about his new book, Journal Of The Plague Year. Described as a 'howl of rage' against the drastic funding cuts to his renowned theatre company, Out Of Joint, the book details Max's correspondence with the Arts Council, and he makes his case to Kirsty for public funding of the arts.

Opposite: Twins in front of the two Sunflowers paintings

The Sunflowers exhibition, which opens at the National Gallery in London from 25 January to 27 April 2014, offers visitors the opportunity to compare and contrast two of Vincent van Gogh's iconic 'Sunflower' paintings. The paintings, one owned by the National Gallery, the other by the Van Gogh Museum, Amsterdam, are two of the five versions of 'Sunflowers' that are now spread around the world (the others are currently in Tokyo, Munich and Philadelphia).

Journal of the Plague Year by Max Stafford-Clark is out now in paperback published by Nick Hern Books.

Grudge Match is in selected UK cinemas from today, certificate 12A.

Goth Girl: and the Ghost of a Mouse by Chris Riddell is out now in hardback published by Macmillan Children's Books.