BBC One
Dolphins - Spy in the Pod
Main content 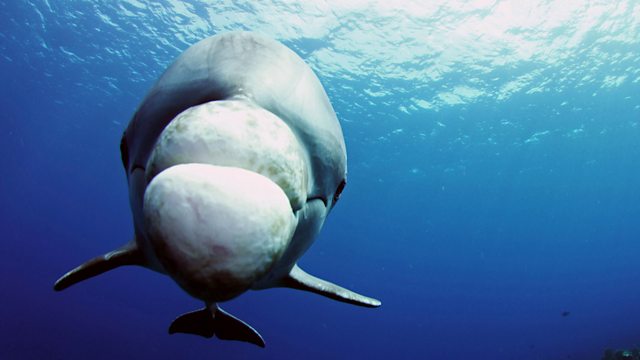 Dolphins - Spy in the Pod
Episode 2 of 2

Hidden cameras offer the chance to go into the heart of the dolphins' world, revealing the remarkable family life of the orca, and the dolphins that wear sponges on their noses.

Remote-controlled Spy Creatures reveal dolphins as never before. Meet the orca, king of the dolphins, and discover the intimacy of its remarkable family life. Find dolphins that wear sponges on their noses, and race with the fastest dolphin in the world - the Dall's porpoise.

Discover a real dolphin secret agent that carries a camera into the pod to uncover their mysteries of communication and interactions. Elsewhere, a young bottlenose begins a life on his own joined by Spy Puffer and Spy Baby - a cute camera dolphin that has bubble conversations with real dolphins! The youngster makes friends with a rare humpback dolphin, joins a gang and takes part in a bizarre initiation ceremony. He also becomes intoxicated on the secretions of strange fish and finally woos a female with gifts and charm.

Most of the behaviour is filmed for the first time. Other spectacles include superpods of common dolphins feeding among sharks and orcas using their cleverness to catch dolphins and seals. Spy Dolphin joins a pod as it strands itself to catch fish and it's curtains for one Spy Creature as he himself becomes a meal.

Never before has the extraordinary intelligence of dolphins been so intimately revealed.

See all episodes from Dolphins - Spy in the Pod