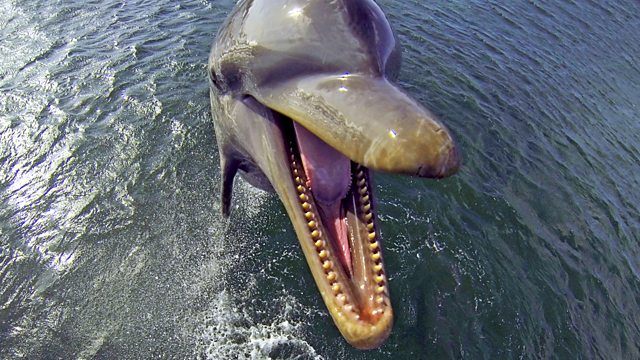 Dolphins - Spy in the Pod
Episode 1 of 2

Hidden cameras offer the chance to go into the heart of the dolphins' world. Spinner dolphins hunt huge shoals of lanternfish while dodging the gaping mouths of giant rays.

The award-winning team behind Penguins - Spy in the Huddle use hidden cameras to go into the heart of the dolphins' world, offering the chance to encounter dolphins up-close. The camera eyes of thirteen different 'Spy Creatures', including Spy Dolphin, Spy Nautilus and Spy Turtle, allow behaviour to be captured that has never been filmed before, including a vast superpod of spinner dolphins hunting huge shoals of lanternfish while dodging the gaping mouths of giant rays.

In Mozambique, a newborn bottlenose dolphin learns from his mother as they follow a mysterious gathering of stingrays and then hunt huge kingfish. He practices his sonar, plays with bubbles and also discovers ways to dislodge pesky suckerfish. Nearby, the males live a playboy lifestyle as they play chicken with supertankers, visit a coral health spa and surf the waves. When they try to woo the females their direct approach threatens the baby, but eventually bouquets of seaweed have the desired effect.

Other astonishing sights include dolphins using rings of mud to catch fish and the spectacular highspeed leaps and corkscrews of spinner dolphins. There is humour too, when Spy Turtle encounters real amorous turtles and Spy Squid has a near miss with a hungry potato bass.

See all episodes from Dolphins - Spy in the Pod