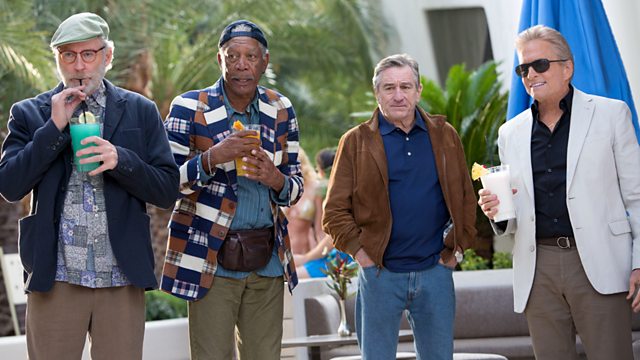 Sculptor Tom Price on his exhibition at the Yorkshire Sculpture Park, Jarvis Cocker and Martin Wallace on their film about Sheffield steel, and new comedy Last Vegas reviewed.

Last Vegas stars Hollywood heavyweights Morgan Freeman, Robert De Niro and Kevin Kilne as a group of sixty and seventy somethings throwing a stag do for their old friend Billy, played by Michael Douglas. The film, which has been described as The Hangover for the older generation, explores issues of retirement and bereavement against the backdrop of the excesses of Las Vegas. Antonia Quirke reviews.

Sculptor Tom Price talks about a new exhibition of his work at the Yorkshire Sculpture Park. His bronze sculptures of contemporary figures were initially inspired by the expressions on people's faces as they watched a performance piece by Price in which he spent a week licking a gallery wall. Tom Price discusses the legacy of the YBAs and using dentists' tools to create the fine detail on his sculptures.

Jarvis Cocker and Martin Wallace talk about their film The Big Melt which was commissioned to celebrate the centenary of stainless steel production in Sheffield. Created from archive from the British Film Institute and set to a score composed by Cocker and performed by Sheffield musicians, the film tells the story of steel and of Sheffield's past.

Front Row looks ahead to what 2014 may have in store in the world of pop music. Music journalist Kitty Empire discusses the musicians that are likely to dominate the next twelve months and which artists are likely to release new albums.

Naomie Harris; Nigella Lawson in The Taste; Mahan Esfahani; 2014 in books and art

Last Vegas is released in UK cinemas on Wednesday 3 January 2014, certificate 12A.

Tom Price, the exhibition is on at Yorkshire Sculpture Park, Wakefield from Saturday 4 January until Sunday 27 April 2014.

The Big Melt is being screened at the Curzon cinema, Chelsea in London with a Q&A session afterwards with Jarvis Cocker & Martin Wallace on Wednesday 8 January 2014.