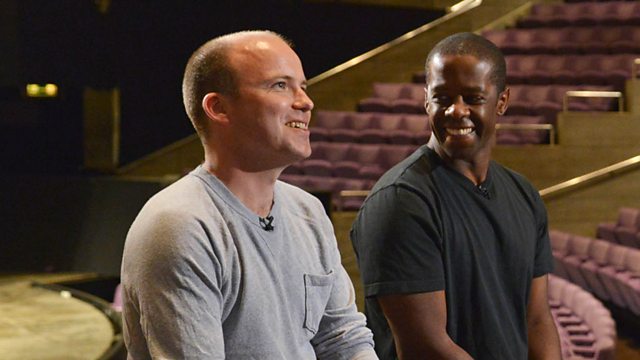 Paul Allen explores the allure of evil through great villains, from Hollywood baddies to Shakespearean antiheroes and real people, with great British actors, directors and writers.

With a nod to the Pantomime season, Paul Allen presents 'Anything but Banal - The Fascination of the Villain'. Hannah Arendt coined the phrase 'the banality of evil', but drama, from the Greeks to The Sopranos, suggests it's anything but. Evil is frighteningly attractive and exciting.

Paul Allen explores the allure of evil through the great villains, from Hollywood baddies to Shakespearean antiheroes, with notable British actors, directors and writers from stage and screen.

He learns the art of playing the villain from Rory Kinnear, Iago to Adrian Lester's Othello at the National Theatre this year. Kinnear certainly disagrees with Coleridge's description of Iago as a 'motiveless malignity'. Jonathan Slinger reveals that Macbeth and Richard III, too, have strong reasons for their violent actions. Nina Kristoffersen, explains why, though Medea murders her children, she is not simply a monster.

Maxine Peake describes how she researched for her performance of Myra Hindley, and the impact this had on her. Stephanie Beacham, Sable Colby in Dynasty, and about to give her Wicked Queen in Snow White in Birmingham, relishes the power of playing the baddie who, after all, is always the engine of the narrative.

Paul talks, too, to Antony Sher, Henry Goodman and Timothy West, who have played Richard III, Shylock, Hitler and Stalin.

Richard Eyre, directing 'Stephen Ward', Andrew Lloyd Webber's new musical about the Profumo affair, explains how a supposed villain can be the victim of a villainous society and Alan Ayckbourn considers the delight and moral necessity of creating venal characters.

There's insight from Judi Dench, into the mind of Lady Macbeth, and from Ian McKellen, who spoke to Paul Allen when he was playing Richard III in 1990. And in a break from rehearsing the National Theatre's forthcoming production of King Lear, Kate Fleetwood, Anna Maxwell Martin and Sam Troughton consider, Goneril, Regan and Edmund.