Schedule
BBC Radio 4 Extra
A Cause for Caroling
Main content 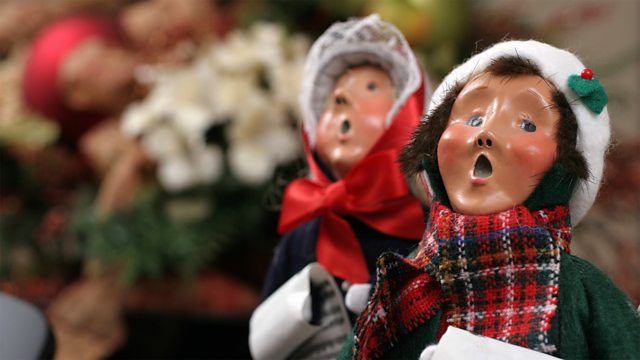 Ring in the New

A Cause for Caroling
Episode 10 of 10

Jeremy Summerly concludes his history of the carol tradition, pondering the success of new carols over the last century. From December 2010.

Jeremy Summerly concludes his history of the carol in Britain pondering the success of new carols over the last century. While King's College, Cambridge organist Stephen Cleobury insures a supply of newly commissioned carols for his massive international audience Jeremy wonders whether the popular songs from Berlin's 'White Christmas' to Slade's 'Merry Christmas' don't help sustain a more genuine caroling tradition.
He also recalls his own first experience of carols at Lichfield cathedral where John Rutter's 'Shepherd's Pipe Carol' was an astonishing discovery for the eager young chorister.
And Jeremy also ponders the continued appeal of the carol and why, while it's been in decline throughout its history, it continues to thrive.

Series Description:
The Christmas carol is as popular now as it was when carolers celebrated the birth of Edward III in 1312. Back then the carol was a generic term for a song with its roots in dance form, nowadays only the strictest scholar would quibble with the fact that a carol is a Christmas song.
But the journey the carol has taken is unique in music history because each shift in the story has been preserved in the carols that we sing today. Go to a carol concert now and you're likely to hear folk, medieval, mid-victorian and modern music all happily combined. It's hard to imagine that happening in any other situation.
In these programmes Jeremy Summerly follows the carol journey through the Golden age of the Medieval carol into the troubled period of Reformation and puritanism, along the byways of the 17th and 18th century waits and gallery musicians and in to the sudden explosion of interest in the carol in the 19th century. It's a story that sees the carol veer between the sacred and secular even before there was any understanding of those terms. For long periods the church, both catholic and protestant, was uneasy about the virility and homespun nature of carol tunes and carol texts. Nowadays many people think that church music is defined by the carols they hear from Kings College Cambridge.
He traces the folk carol in and out of church grounds, the carol hymn, the fuguing carol and the many other off-shoots, some of which survive to this day and many others which languish unloved but ready for re-discovery.
It's a journey full of song describing the history of a people who needed expression for seasonal joy in the coldest, hardest time of the year. And however efficient the heating system may be, the carol still generates warmth. Much of that is to do with the positive nostalgia of this music.
That nostalgia is in part due to the fact that carols are one of the first kinds of song children actually sing rather than hear. Many favourite carols were actually written for Children; Once in Royal David's City the most familiar example. Another factor is the concentration in the texts on the humanity of nativity with tunes garnered from the uninhibited world of folk song and ballad.
The series title is taken from a Thomas Hardy poem in which he ponders of a Darkling Thrush why it should chose to sing - 'so little cause for carolings of such ecstatic sound' - is the question asked. THis series is an attempt to answer why Carols remain so popular and familiar to so many. In fact Hardy himself, in his first novel Under The Greenwood Tree, went some way to answering his own question when he described the Mellstock Quire singing at Midnight on Christmas Eve:
'Then passed forth into the quiet night an ancient and time worn hymn, embodying a quaint Christianity in words orally transmitted from father to son through several generations down to the present characters, who sang them out right earnestly."
Jeremy brings the series up to date with the story of the famous Nine Lessons and Carols service broadcast by the BBC since the 1920s but born originally in Truro. It's a service that commands a worldwide audience measured in many millions, but as Jeremy concludes it has left an imbalance in the appreciation of our caroling tradition, a tradition that has always had one foot in the pub and another in the choir stalls.
Producer:Tom Alban.

See all episodes from A Cause for Caroling