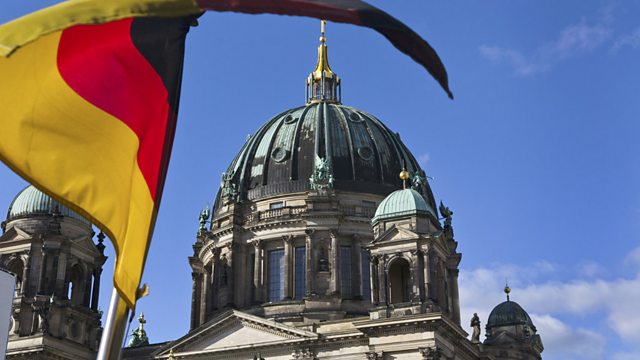 Anne McElvoy considers why, in spite of Germany being Europe's leading political and economic power, it has a less clear idea of its cultural role.

Germany is Europe's pre-eminent and unrivalled power, its largest economy and the Continent's most potent political force. But culturally things are more confused.

More than twenty years after German unity in 1990, understanding what it is to be German today is far harder to pin down than the facts of its economic success and predominance in the European Union. So what are the reasons for this paradox? And how should we in Britain, profoundly affected by Germany and the country's ideas of itself, understand the nation today?

Anne McElvoy closely observed the old communist East Germany at first hand in the 1980s when she studied at East Berlin's Humboldt University, with its Stasi teaching corps and 7.00am lectures in Marxist-Leninism. In the 1990s, when she covered Germany as a correspondent, she wrote about the evolution of the new Germany formed from two very different antecedent countries.

Now, in this "Sunday Feature", Anne McElvoy re-visits Berlin to gauge what ideas of Germany are emerging. She talks to eminent writers, artists and figures in the performing arts as well as those who observe the broader cultural and political scene to discover how they see their homeland's past, present and future.

Among those taking part: the German Book Prize winner Julia Franck, the grand-daughter of a leading East German communist artist - and the daughter of a dissident; eminent poet Elke Schmitter; political and social thinker Ulrike Guerot; British dramatist and director Simon Stephens; best-selling thriller writer Ferdinand von Schirach whose grandfather headed the Hitler Youth; and Isabella von Bülow of the dynasty which includes on one side the composer and conductor Hans and on the other the field marshal Friedrich Wilhelm.