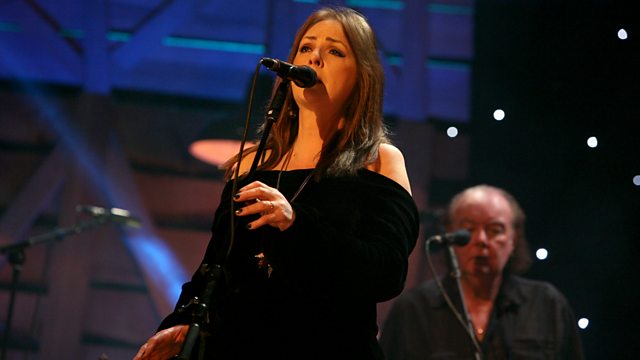 The Folk Awards ceremony celebrates the folk scene and its achievements over the past 12 months, as well as giving special awards to honour outstanding lifetime contributions. This year, those awards will go to artists including English musician Martin Carthy and popular Irish group Clannad.

Martin - with daughter Eliza Carthy - and Clannad will both perform live during this year's show, as will New York songwriter Suzanne Vega and remarkable big band Bellowhead. Cornish shanty choir Fisherman's Friends will also sing live after a long absence from UK stages.

Martin Carthy is one of the most influential musicians ever to have worked with traditional music. Responsible for song arrangements that inspired Bob Dylan and Paul Simon - Carthy's version of Scarborough Fair was famously adopted by Simon - and a highly distinctive guitar style, he has spent more than 50 years as a vital force on the British folk scene. As well as his work as a solo artist, his contributions have included his duo with Dave Swarbrick, membership of The Watersons and later Waterson:Carthy, a stint in Steeleye Span, the formation of pioneering folk-brass band Brass Monkey and a key role in multi-cultural project The Imagined Village.

Clannad were formed in 1970 as a family band in rural Donegal. Siblings Ciaran, Pol, and Moya Brennan and their two twin uncles Noel and Padraig Duggan began performing in the family pub. Younger Brennan sister Enya, who left to pursue a successful solo career in 1981, was also a member of the group. During the 1980s, thanks largely to their popular work on the music for TV series Harry's Game and Robin of Sherwood, Clannad became one of the world's most successful and enduring exponents of Irish-language song.

This year's awards will see the addition of a new element - the Radio 2 Folk Awards Hall of Fame. The Hall of Fame will recognise the special contribution of an individual to the world of folk music - someone whose impact and influence made a lasting impression.

The first entrant to be inducted into the Hall of Fame is Cecil Sharp - widely regarded as a key figure in laying the foundations for the modern folk revival in the early 20th century.

Tonight's event also includes the presentation of the BBC Radio 2 Young Folk Award, which is the network's annual search for the most promising young folk act in the UK. During the ceremony's interval, Simon Mayo will present a special on air backstage show featuring each of the four Young Folk Award nominees live in session, with special guest Jon Boden.

The Folk Awards ceremony will be streamed live on the BBC Radio 2 website and on the BBC Red Button channel from 8 - 10.30pm.