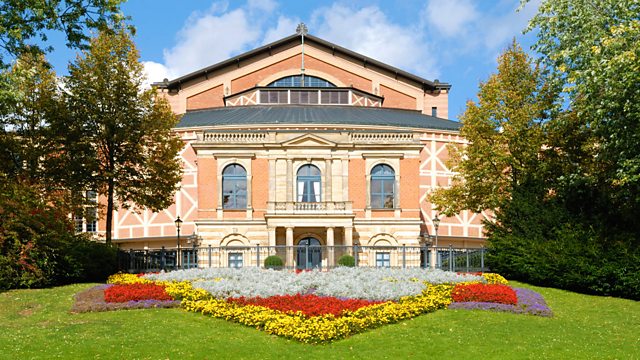 Tom Service explores the ideas behind the theatre that Wagner built in Bayreuth for the ideal performance of his great music dramas, especially The Ring of the Nibelungs.

An exploration of the ideas behind the theatre that Wagner built in Bayreuth for the ideal performance of his great music dramas, especially The Ring of the Nibelungs. Inspired by the dramas of Aeschylus and the design of ancient Greek amphitheatres, Wagner created a performing space that revolutionised opera production. With its hidden orchestra and studied lack of architectural ornamentation, the theatre was almost "invisible", focusing the attention solely on the stage image. In this, Wagner's radical vision anticipated the immersive experience of cinema. After his death it became a temple to holy German art that became enmeshed in the dark politics of the 1930s only to rise from the ashes after the 2nd World War with renewed vigour. Ever since Wagner's widow took charge after The Master's death, the Festival has been a family business, and like The Ring, the story of the Bayreuth Festival is essentially a family saga. Tom Service talks to Sven Friedrich, head of the Bayreuth museum and archive, as well as other Wagner experts: John Deathridge, Patrick Carnegy, Michael Ewans, Oliver Hilmes and Gundula Kreutzer.