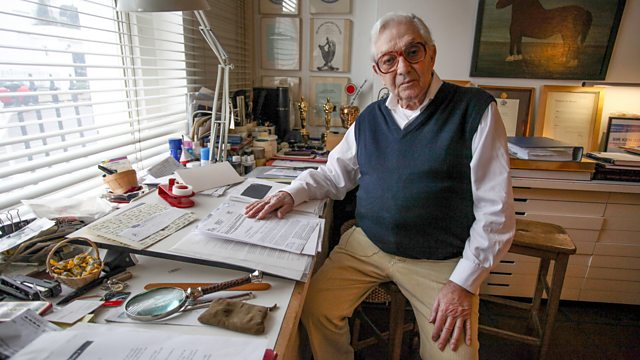 Matthew Sweet meets Ken Adam, designer of famous film sets from Dr No and Goldfinger to Dr Strangelove and The Ipcress File.

If you think of a megalomaniac villain's lair, it's almost certain your imagination will be fuelled by the creations of Sir Ken Adam.

Matthew Sweet meets the game-changing film designer. Most famous for designing Bond films and Dr. Strangelove, the ambition of Ken Adam's vision is unrivalled. He created Dr No's underwater hideout, Goldfinger's Rumpus Room and Blofeld's volcano lair, and a Cabinet War Room for Dr Strangelove so persuasive and convincing that - the apocryphal story goes - when Ronald Reagan entered the White House he asked to see it.

Matthew hears Ken Adam's story from the man himself. It's an extraordinary one: as a boy in Berlin he witnessed the smoking ruins of the Reichstag on his way to school; as a young man he was one of only two Germans to fly a fighter jet for the RAF over his own homeland. And Matthew explores how much Ken Adam - born Klaus Hugo Adam 92 years ago - shaped our sense of what a glamorous urban environment should look like.

Matthew Sweet explores how Ken Adam's playful take on modernism has influenced not just film but also the real world, feeding the imagination of a generation of architects and changing our built environment.

Sir Ken Adam’s Oscars for the set design of Barry Lyndon and The Madness of King George, and his art tools

Sir Ken Adam in his workroom