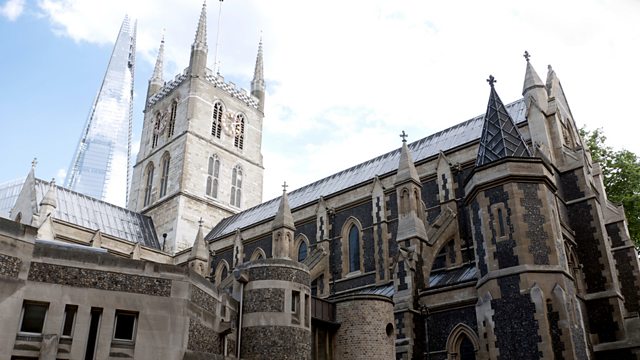 The series exploring workings of Church of England cathedrals continues with Southwark, mother church to its diocese and parish church in a fast-changing neighbourhood.

With remarkable access to the dean and clergy, Cathedrals - Southwark tells the story of a week-in-the-life of Southwark Cathedral in London, revealing how it attempts to remain relevant in a modern, diverse and largely secular city.

Cathedrals - Southwark is the final film of award-winning documentary maker Richard Alwyn's trilogy of portraits of Church of England cathedrals. After Wakefield and Wells, Alwyn turns to Southwark Cathedral in London's Bankside. As well as being mother church to its diocese, Southwark Cathedral is a parish church serving a fast-transforming neighbourhood.

For canon pastor and sub-dean, Bruce Saunders, the rapid development of the neighbourhood means the cathedral must involve itself in a range of complex planning issues; 'we're not prepared simply to stand by and watch the area sort of ethnically cleansed of its poor people. ... We want to try and make a noise about that, and to try to make it clear that that's neither right nor is it good for the community in the long run'.

Southwark Cathedral has long been described as 'radical', well-known for its 'inclusivity'. Alwyn meets a Muslim 'Welcomer' who greets visitors once a week and discusses the cathedral's reputation as London's 'Pink' Cathedral with the dean, The Very Rev Andrew Nunn, who wants his cathedral to live out its principles rather than become a soapbox.

The Dean tells Alwyn that the praise of God is the cathedral's 'core activity' and Alwyn's film constantly returns to the cathedral's prayer life, from well-attended Sunday Eucharists to barely-attended daily Morning Prayer. He films a Chapter meeting considering the cathedral's latest initiative to re-examine what is meant by God and engages both the Dean and Sub-Dean on this question.

See all episodes from Cathedrals