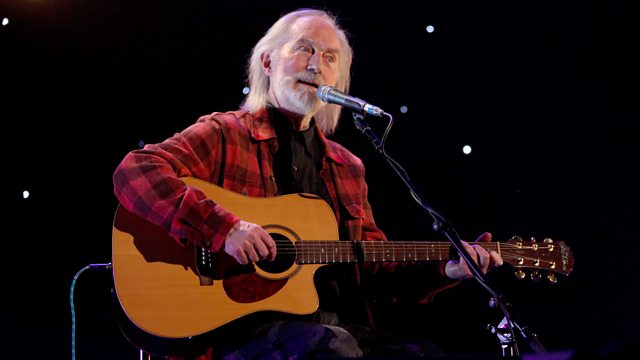 In a programme first broadcast in 2013, Roy Harper shares his musical milestones with Matt Everitt, including working with Led Zeppelin, Paul Simon and Bert Jansch.

Since his emergence in the mid-60s, Roy Harper has been regarded as an icon of British music - not for having huge success, but for his beautiful, poetic lyrics and his unique guitar playing.

With the likes of Bert Jansch and Davey Graham, Roy helped forge the British folk scene. In 1971 he recorded his classic Stormcock album, combining folk, jazz and rock in a way that's still inspiring people today.

Roy recalls his rebellious youth and obsession with skiffle that led to the folk clubs of Soho, his friendships with Jansch and a young Paul Simon, recording Stormcock, and his collaborations with Jimmy Page. Led Zeppelin wrote a track called Hats Off To Harper.

He also details the story behind his classic When An Old Cricketer Leaves The Crease, the song that John Peel played when he announced on air that his friend and long-serving producer John Walters had died. Walters had been planning to play it at Peel's funeral.

Roy also talks frankly about his own personal battles with the music industry, the financial problems in the 80s that left him homeless, He discusses his remarkable comeback, which culminated with Man And Myth (his first studio album in 13 years) and how it feels to be cited as major influence by the likes of Johnny Marr, Fleet Foxes and Joanna Newsom.