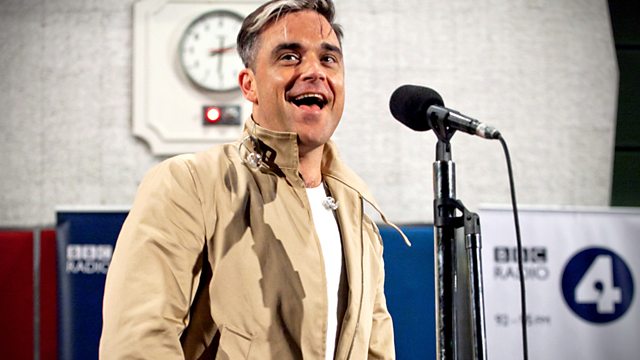 Robbie Williams talks to John Wilson about the 1997 hit Life Thru a Lens, his first post-Take That album. From November 2013.

John Wilson returns with a new series of Mastertapes, in which he talks to leading performers and songwriters about the album that made them or changed them. Recorded in front of a live audience at the BBC's iconic Maida Vale Studios. Each edition includes two episodes, with John initially quizzing the artist about the album in question, and then, in the B-side, the audience puts the questions. Both editions feature exclusive live performances.

Programme 1, A-side. "Life Thru A Lens" with Robbie Williams

Today, Robbie Williams is the UK's best-selling solo artist of all time. But when he released his debut solo album, "Life Thru A Lens", after leaving the all-conquering boyband, Take That, it was initially met with negative reviews and was slow to take off. However, with songs like Ego A Go Go, Lazy Days, Let Me Entertain You and, of course, Angels, the album not only went on to spend more than 4 years in the charts and become the 58th best-selling album of all time, it also laid down the solid foundations for all that was to follow: nine further solo albums, seven number one singles and more BRIT awards than any other artist.

Here Robbie Williams talks candidly with John Wilson about the album that started it all and they are joined in the studio by the album's co-writer and producer, Guy Chambers as well as guitarist Gary Nuttall and a string quartet.

The B-side of the programme, where it's the turn of the audience to ask the questions, can be heard tomorrow at 3.30pm.