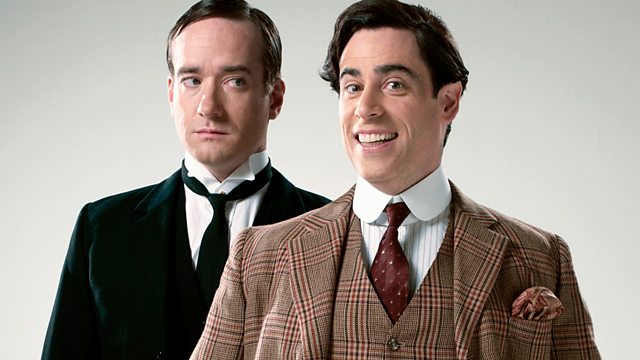 Arts news, reviews and interviews with Kirsty Lang, including Matthew Macfadyen and Stephen Mangan on Jeeves and Wooster, and Fiona MacCarthy on Stanley Spencer's war paintings.

Kirsty talks to actors Matthew Macfadyen and Stephen Mangan as they play the roles of Jeeves and Wooster in a new stage version of one of P G Wodehouse's much-loved books.

The architect Frank Gehry, whose Guggenheim Museum in Bilbao and Walt Disney Concert Hall in Los Angeles feature the undulating metallic curves for which he has become known, opens a new exhibition of his work this week. Frank Gehry discusses his new sculptures, a series of artworks based on fish, a recurrent motif in his art and architecture, as well as his designs for the new development at Battersea Power station in London.

Stanley Spencer's masterpiece is a series of murals he painted in a small chapel in the Hampshire countryside. The paintings depict his life on the Salonika front during World War I, but concentrate on the domestic rather than the combat, on doing the laundry and eating jam sandwiches. The murals have now been removed while the chapel is undergoing restoration and is on show in London and then Chichester. The artist's biographer, Fiona MacCarthy, tells Kirsty about the story behind the paintings.

This week a Swedish cinema announced that it was going to rate movies according to the Bechdel Test, in which movies get an A rating for gender equality if they have at least two named female characters who talk to each other about something other than a man. Melissa Silverstein, the founder of the influential Women And Hollywood website, tells Kirsty why she thinks this is just the start of a conversation we need to have about in women in film.

Jeeves and Wooster in Perfect Nonsense

Perfect Nonsense is at the Duke Of York’s theatre in London currently booking until 8th March 2014.

Image above:  Matthew Macfadyen and Stephen Mangan in a Perfect Nonsense. Photo by Uli Weber.

Stanley Spencer: Heaven in a Hell of War

Gallery: Images from Stanley Spencer: Heaven in a Hell of War

Frank Gehry - Fish Lamps is at the Gagosian Gallery in London until 21st December 2013.