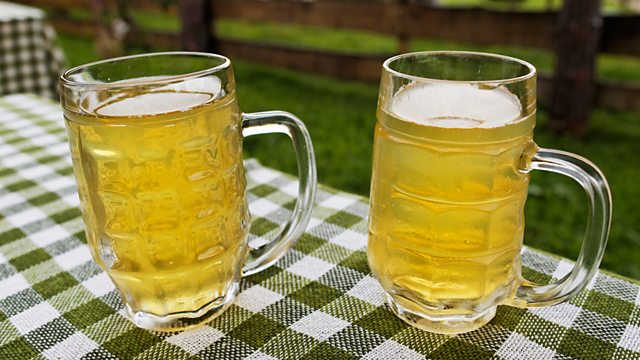 Award-winning drinks writer Pete Brown joins Sheila Dillon to explain why bottles of cider should be the drink of choice on the UK's dinner tables.

Award winning drinks writer Pete Brown joins Sheila Dillon to explain why bottles of cider should be the drink of choice on the UK's dinner tables.

A cider revival has been building for a number of years, many credit the "over-ice" advertising campaigns of the last decade for raising mainstream interest. What's happened since that time has been fascinating to watch for producers and drinkers alike.

At the premium, craft end of the cider business more and more small scale producers have arrived on the scene. Wales alone, which all but lost its cider making culture, now has more than 40 new ciders being produced. Pete Brown, author of the recently published, World's Best Cider, has travelled across the globe to document the fact that this is a revival that's spread far beyond the United Kingdom.

As part of this world tour Sheila and Pete tell the story of the Tieton Cider Works, a new cider business in Washington State in North West America. The Tieton producers are experimenting with new techniques and flavours, including the use of hops and natural fruits. This might sound like a step too far for many traditionalists and in the programme Sheila and Pete give their verdict.

Meanwhile in high-street pubs, supermarkets and off-licences more big brands have moved into the cider market, including Carlsberg and Stella Artois, they along with more familiar names like Bulmers and Thatchers have launched a wide range of fruit ciders. It's this part of the market that is really booming, but is it really cider? Sheila looks at the often confusing world of the ingredients and liquids that are allowed to become part of a glass of cider.