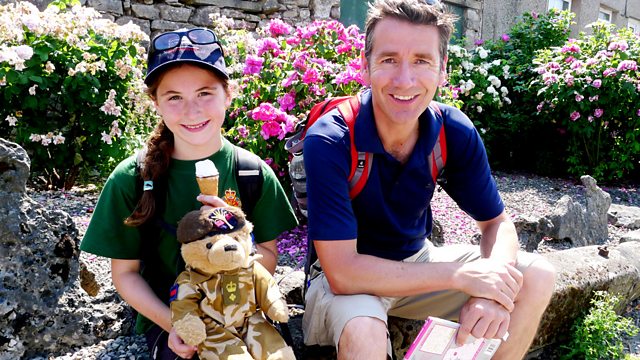 Newbiggin on Lune to Kirkby Stephen

Broadcaster and musician Dougie Vipond joins 10-year-old Annabelle Asher for a section of her 190-mile Coast to Coast charity walk.

This week's Ramblings is presented by the broadcaster and musician, Dougie Vipond, who took over the map and microphone on a beautiful July day when Clare Balding was away.

Dougie joined an amazing young girl, ten year old Annabelle Asher, on a stretch of the Coast to Coast walk from Newbiggin on Lune to Kirkby Stephen.

With her parents' support, Annabelle spent the first couple of weeks of her summer holidays walking the entire 190 mile route in order to raise money for the Welsh Guards Afghanistan Appeal.

Always a keen walker - once turning down a trip to Disney, for the chance to climb Snowdon - Annabelle completed the Cotswold Way last year (for the same charity), and has her sights set on the Pennine Way.

Dougie Vipond was a founding member of Deacon Blue. For BBC Scotland he presents the rural affairs TV programme, Landward, The Adventure Show, and Sportscene.

Durham with Maggie and Keith Bell—Series 25