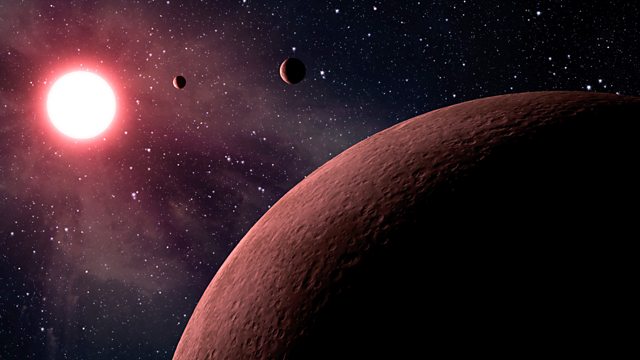 Melvyn Bragg and his guests discuss exoplanets. Astronomers have speculated about the existence of planets beyond our solar system for centuries. Although strenuous efforts were made to find such planets orbiting distant stars, it was not until the 1990s that instruments became sophisticated enough to detect such remote objects. In 1992 Dale Frail and Aleksander Wolszczan discovered the first confirmed exoplanets: two planets orbiting the pulsar PSR B1257+12. Since then, astronomers have discovered more than 900 exoplanets, and are able to reach increasingly sophisticated conclusions about what they look like - and whether they might be able to support life. Recent data from experiments such as NASA's space telescope Kepler indicates that such planets may be far more common than previously suspected.

Don Pollacco
Professor of Astronomy at the University of Warwick

Suzanne Aigrain
Lecturer in Astrophysics at the University of Oxford and a Fellow of All Souls College.

Don Pollacco at the University of Warwick

Suzanne Aigrain at the University of Oxford

Barrie W Jones, Life in the Solar System and Beyond (Springer, 2004)

Barrie W Jones, The Search for Life Continued: Planets Around Other Stars (Springer-Praxis, 2008)