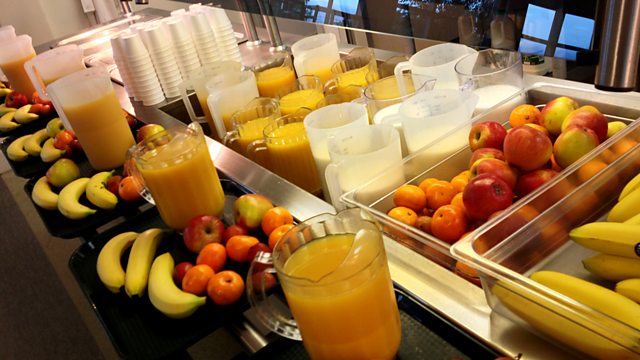 Sheila Dillon investigates the new School Food Plan and asks if it can make real change.

The School Food Plan, written by Henry Dimbleby and John Vincent, aims to increase take-up of school meals, improve the quality of food served and tackle student hunger and the early causes of health problems.

Released in July, it contains sixteen 'actions', from putting cooking in the curriculum to providing money for breakfast clubs to improving the 'image' of school food. John and Henry travelled to more than sixty schools in England, and found that there were three things in common to schools that are getting food right.

In this edition of the Food Programme, Sheila Dillon reveals a typical day at the David Young Community Academy, a secondary school in Leeds that has embodied these three 'principles' since its opening in 2006.

The school, led by Principal Ros McMullen, has a school meals take-up of over seventy percent, compared with a national average of 43 percent. Sheila finds out how they've done this, and asks what other schools can learn from their approach.

Sheila also asks the Plan's co-author Henry Dimbleby and Jeanette Orrey, who inspired Jamie Oliver's original school food campaign, what actual differences we may see on the ground as a result of this new attempt to change the way that schoolchildren eat.

A Quiet Food Revolution: The Story of Myrtle and Darina Allen

Find out more about the School Food Plan