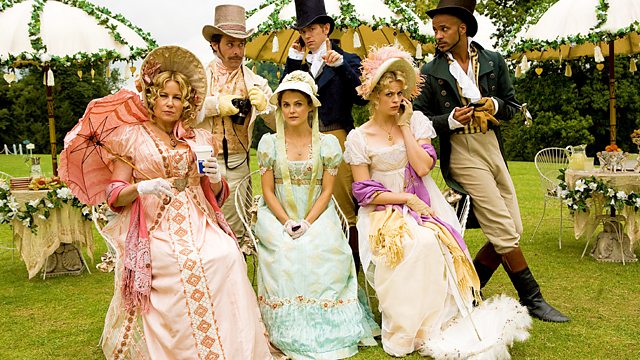 The romantic comedy Austenland, based on a novel of the same name, centres on a single 30-something American woman who travels to Britain to visit a resort where the Jane Austen era is recreated, hoping to find her very own Colin Firth version of Mr Darcy. Critic Viv Groskop - who was born a stone's throw away from Chawton, where Austen wrote Pride and Prejudice - reviews.

Stephen Poliakoff, writer of Caught On A Train and Shooting The Past, reflects on his controversial debut TV drama Hitting Town, which was made in 1975 and is released on DVD for the first time. Written when he was 23, the TV play made headlines when Mary Whitehouse campaigned for it to be banned, appalled by its storyline about a brother and sister who embark on an incestuous affair. Poliakoff reveals his own sister's reaction to Hitting Town and his other incest drama Close My Eyes.

Australian author Hannah Kent's debut novel Burial Rites tells the story of the last woman executed in Iceland. Set in the winter of 1829 and including real court documents, the book combines Nordic noir with cold case fiction. Kent describes how she first heard about the story when visiting Iceland as a teenager and what drew her to write about the case a decade later.

Artists Elmgreen and Dragset have turned five former textile galleries at the Victoria and Albert Museum into an apartment belonging to a fictional retired architect, using objects from the museum's collection alongside items from antique markets. Kirsty and architecture critic Hugh Pearman visited the apartment to see if they could decode its secrets.

Austenland is in cinemas now, certificate 12A

Stephen Poliakoff's Hitting Town is included in the DVD box-set Plays for Britain which is out now.

Burial Rites by Hannah Kent is out now in hardback and e-book.

Tomorrow by Michael Elmgreen and Ingar Dragset is showing at the V&A Museum in London from 1st October 2013 to 2nd January 2014.