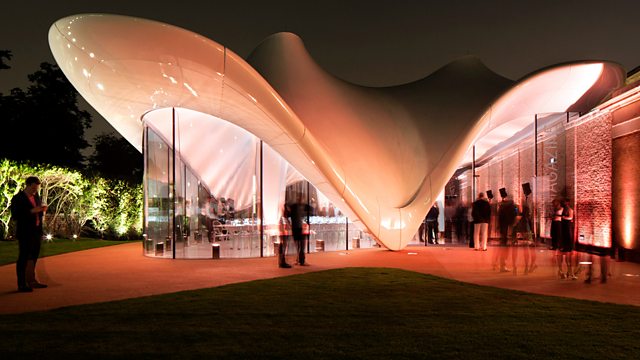 Presented by Rana Mitter. With architect Zaha Hadid on her new Serpentine Gallery structure, discussing French film music and a debate on cynicism and why it may be good for us.

With Rana Mitter who meets Zaha Hadid as her new building opens in London. The influential architect has created a new wing for the Serpentine Gallery in Hyde Park by transforming a 19th century gunpowder magazine into 21st century curves and squiggles. She reflects on how the design seeks to fuse her need for innovation with respect for the historic site.

Finally cultural debate with philosopher Julian Baggini and classicist Richard Seaford on whether the prevalence of cynicism towards the public sphere may turn out to be a positive rather than a negative. Rana Mitter hears how the original cynic's emphasis on nature over culture may encourage us to alter our expectations and move society in a fundamentally different and healthier direction.

The Serpentine Sackler Gallery, designed by Zaha Hadid, opens to the public on 28th September