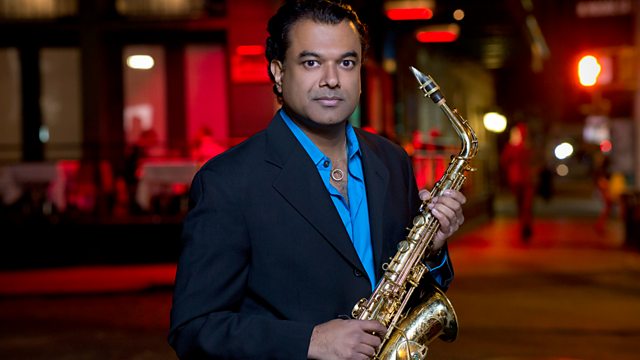 A second chance to hear one of Jazz on 3's gig highlights of 2013: Indian-American saxophonist Rudresh Mahanthappa in performance with his quartet, Gamak, at Ronnie Scott's.

Mahanthappa is second-generation Indian-American and his music reflects this heritage: the classical Carnatic tradition of southern India is absorbed into a progressive jazz language that takes in complex, muscular rhythmic patterns as well as hip-hop grooves. In Gamak he casts his net even wider, pulling in Americana, go-go and heavy metal along the way too. The band's name comes from the south Indian term for melodic ornamentation, so it's fitting that he's joined in this group by guitarist Dave 'Fuze' Fiuczynski, known for his intricate, microtonal playing and for whom Mahanthappa wrote much of the music. The band is completed by longtime collaborators Francois Moutin (bass) and Dan Weiss on drums.

Sound of Cinema: Jazz and Film