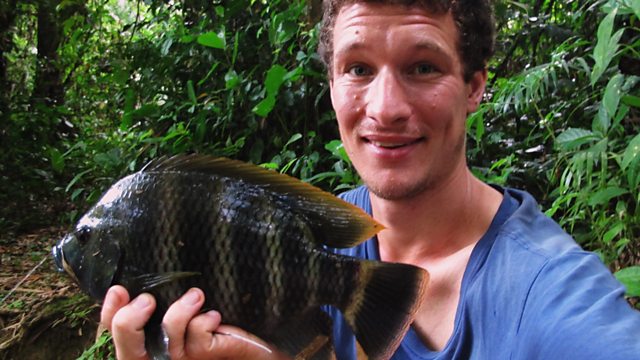 Having survived the death-defying waterfall where we left him last week, Will finds time to observe a troupe of Diana monkeys close-up and catch his first fish of the journey.

Will Millard is the winner of this year's BBC/Royal Geographical Society award for a dream journey project. Will's goal is to descend the Mano and Moro Rivers, which divide Sierra Leone and Liberia, with only a tiny inflatable raft in which to do it. With the Sierra Leone portion of the forest already part of the Gola Rainforest National Park, the river boundary will, it's hoped, shortly become the heart of the Trans-Boundary Peace Park, straddling both countries. Local Liberian villagers, however, are divided about the merits of this significant conservation project.

Meanwhile, in the heart of the rainforest, having survived the death-defying waterfall where we left him last week, Will finds time to observe at close quarters a troupe of Diana monkeys and catch his first fish of the journey. But perils are literally round the next bend in the river, as he encounters an encampment of illegal diamond hunters and hits another disastrous sequence of rapids in which his life is again in danger... He's also not feeling good: a badly infected hand is making paddling the packraft difficult and, weak with exhaustion, Will suspects he may have contracted malaria... But medical help is at least two days' trek away.

Liberian diamond miners near their excavations along the Moro River