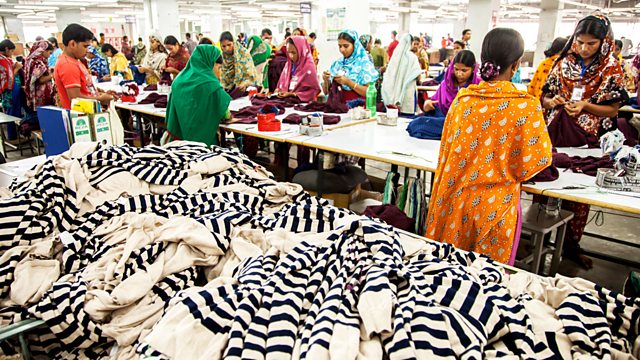 After the factory tragedy in which 1100 garment workers died, Jane Deith reports from Bangladesh on the response of the international companies which source cheap clothes there.

Will the Rana Plaza factory tragedy mean Bangladeshi garment workers no longer have to work in death traps? It's five months on from the collapse of the 8 storey building in Dhaka, in which more than a thousand workers died, and several thousand lost arms or legs or were paralysed. Jane Deith reports from Dhaka on what's happened since. Just how much medical and financial help have survivors and families of the dead received?

Campaigners said the disaster should be a "game changer" in forcing international brands who source cheap clothes in Bangladesh to take more responsibility for conditions within the factories they use. Safety inspections of hundreds of premises are due to begin in earnest. But the Western manufacturers are split on who should pay for expensive improvements - the clothing brands or the factory owners? It's estimated that it could cost $3bn to bring all the factories up to scratch.

But there are those who argue that Western shoppers who buy the cheap clothes, and the brands that sell them, don't deserve all the blame. The Bangladeshi government continues to limit the power of trade unions and is accused of failing to act against powerful manufacturing bosses when people die in their factories.

The safety campaigners agree that Western brands pulling out of Bangladesh would be the worst result for the country's four million garment workers and the families who rely on their earnings.

So is it possible to keep them in work and keep them safe?

A Place of Safety?

After the factory tragedy in which 1100 garment workers died, Jane Deith reports from Bangladesh on the response of the international companies which source cheap clothes there.   Read the Transcript