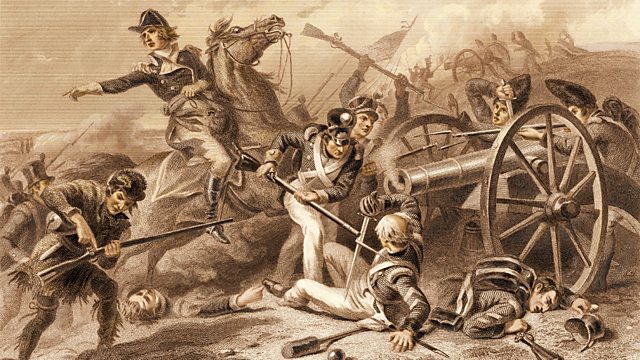 4 Extra Debut. The British arrive to end the war of 1812, and the president waits anxiously to see where they will attack. Read by Jamie Parker.

Nearly 200 years ago, Britain attacked the heartland of the United States. The President and his wife had just enough time to pack their belongings and flee the White House before the British army entered and set fire to the building. From here, the British army turned its sights to Baltimore.

Peter Snow tells the story of this extraordinary confrontation between Britain and the United States, the outcome of which inspired America's national anthem. Using eyewitness accounts, Peter describes the colourful personalities on both sides of this astonishing battle - from Britain's fiery Admiral Cockburn, to the cautious but widely popular army commander Robert Ross and the beleaguered President James Madison whose nation was besieged by a greater military force.

In the first episode, the American watchman at Chesapeake Bay wakes one August morning to find fifty ships of the Royal Navy at anchor. The British have arrived to end, decisively, the war of 1812. In Washington, President Madison waits nervously to see where they will attack first.