BBC Two
The Story of the Jews
Main content 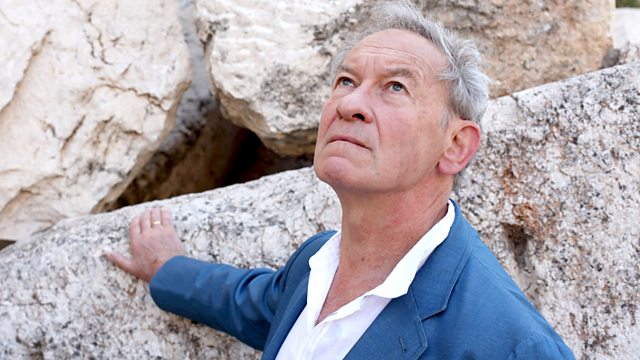 The Story of the Jews
Episode 1 of 5

Simon Schama looks at the Jewish story, starting 3,000 years ago with the emergence of tribal people in contested land and a book to define them across millennia.

The story of the Jewish experience begins 3,000 years ago with the emergence of a tribal people in a contested land and their extraordinary book, the Hebrew Bible, a chronicle of their stormy relationship with a faceless, formless, jealous God. It was loyalty to this 'God of Words' that defined the distinct identity of the ancient Jews and preserved it despite all that history could throw their way - war, invasion, deportation, enslavement, exile and assimilation.

The story unfolds with a dazzling cast of historical characters: Sigmund Freud dying in exile in London; Victorian evangelicals and explorers following 'in the footsteps' of Moses; Jewish mercenaries living, prospering and intermarrying in the pagan land of Egypt; Messianic Jews dreaming of the Apocalypse; and a Jewish historian, Josephus, who witnessed first-hand the moment when the apocalypse finally came and the Romans destroyed the Jewish High Temple in Jerusalem.

See all episodes from The Story of the Jews

See all clips from In the Beginning (2)