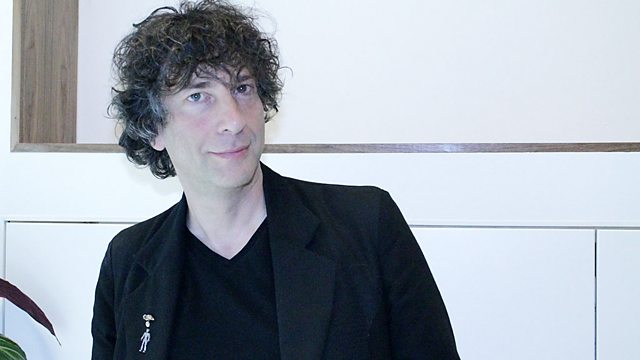 Neil Gaiman joins Janice to talk about his new book The Ocean at the End of the Lane and other projects ahead of his Edinburgh Book Festival, Dundee and Inverness tour dates.

Neil Gaiman joins Janice Forsyth to talk about his latest book, The Ocean at the End of the Lane, returning to the Sandman comic book series, his upcoming projects including touring in Edinburgh, Inverness and Dundee, and the possibility of writing a Doctor Who episode for new Scottish Time Lord Peter Capaldi.

Composer Tod Machover has been crowdsourcing the sounds of Edinburgh to use in the composition of a new symphony, which will premiere as part of the Edinburgh International Festival. He lets us hear some of the materials he's gathered and talks about this ambitious project.

Edinburgh International Book Festival programme STRIPPED celebrates comics and graphic novels. Critic and STRIPPED event chair Graeme Virtue, Dr Padmini Ray Murray, who's on the advisory board of Graphic Scotland, the organisation presenting the 9th Art Award, and the winner of the Award, which is given to this year's best English language graphic novel, tell Janice about this year's programme.

Louise Wyllie, daughter of late artist George Wyllie, has been awarded a scholarship for the MA course in screenwriting at Glasgow Caledonian University and ScreenHI by SHED Productions who make TV shows such as Waterloo Road and Footballers' Wives. She thinks she is the oldest person to study on the course and will take up her place in mid-September. She shares her hopes and fears about becoming a mature student.