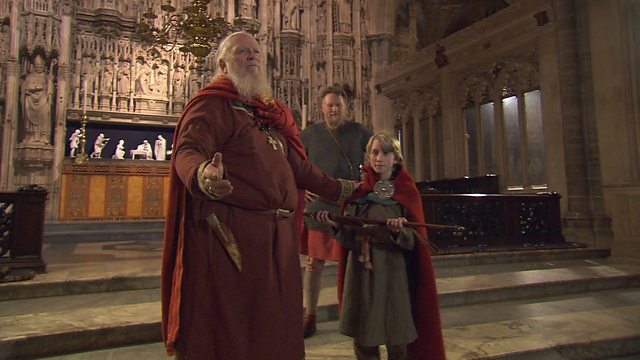 Aethelstan: The First King of England

King Alfred and the Anglo Saxons
Episode 3 of 3

Michael Wood tells the tale of King Alfred's grandson Aethelstan, showing how he fulfilled the family plan to create a kingdom of all England.

In this third episode, Alfred's grandson Aethelstan fulfils the family plan and creates a kingdom of all England.

Travelling from Devon to Cumbria, Scotland and Rome, Michael Wood tells the tale of Aethelstan's wars, his learning and his lawmaking, showing how he created a national coinage and tracing the origin of the English parliament to the king's new assembly politics. But there's also a dark side, with later legends that the king had his brother drowned at sea. In his last desperate struggle, Aethelstan defeated a huge invasion of Vikings and Scots in what became known as the Anglo-Saxon 'Great War'.

Wood argues that Aethelstan was one of the greatest English monarchs, and with his grandfather Alfred, his father Edward and his aunt Aethelflaed, a member of our most remarkable royal family and 'even more than the Tudors, the most gifted and influential rulers in British history'.

The Lady of the Mercians

See all episodes from King Alfred and the Anglo Saxons