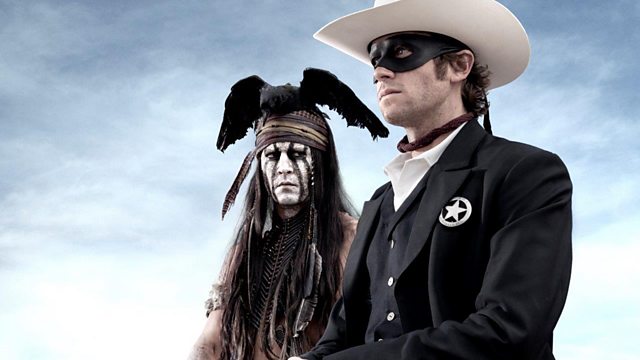 Robbie Collin talks to Johnny Depp about The Lone Ranger and his twist on Tonto, and to writer Armando Iannucci about Alan Partridge: Alpha Papa. Plus a Satyajit Ray retrospective.

Robbie Collin talks to Johnny Depp about The Lone Ranger and why he wanted his Tonto to be more than just a sidekick to the cowboy. And as the less than flattering reviews come in, Depp hits back saying the critics had doomed the film before it ever hit the big screen.

Radio host Alan Partridge returns with Alpha Papa in which the Norwich DJ becomes a hostage negotiator. Co writer Armando Iannucci explains why they waited so long to take Alan to the cinema.

As the British Film Institute looks back at the career of Indian film maker Satyajit Ray, the biographer Andrew Robinson and the director Sangeeta Datta explore his work, in particular the Apu Trilogy and The Big City which is re-released later this month.

The Irish documentary maker Pat Collins has made his first fictional feature, Silence, in which a sound recordist travels around Donegal trying to record a landscape free of man-made noise. He debates our relationship with sound and silence in life and in the cinema.

Only God Forgives; The Heat; My Father and the Man in Black