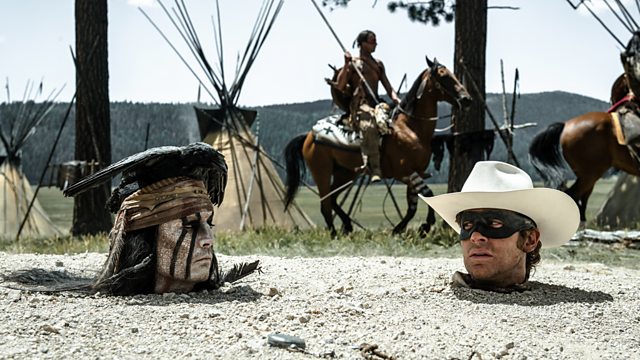 In Johnny Depp's latest film, he plays Tonto, the loyal companion to the Lone Ranger, played by Armie Hammer. The masked hero and his Native American friend fought injustice together in the Wild West, in a popular American TV series of the 1950s - but will the 21st century cinema version of The Lone Ranger be as successful? Writer Matt Thorne gives his verdict.

Artist Conrad Shawcross has transformed the Roundhouse in London into a giant clock for his latest work Timepiece. However, it's a clock with a difference, as it has no face and incorporates a sun-dial which casts shadows on the floor of the performance venue.

With this year's Edinburgh Festival fringe now in full swing, Stephen Armstrong reports on the comedy which has caught his eye so far.

Actress Gemma Chan nominates the 1987 film The Princess Bride for the Cultural Exchange.

It's arguably the best of times of jazz fans hoping to build a collection of classic albums, as LPs by jazz legends of the past are re-issued on CD at bargain prices, often in box sets. Kevin Le Gendre considers the pleasures and pitfalls of the piles of cut-price jazz classics.

The art and craft of translating fiction

The Lone Ranger is released nationwide on 7 August 2013, certificate 12A.

The Edinburgh Festival Fringe is on until 26th August 2013.

Timepiece by Conrad Shawcross is at The Roundhouse in Camden, London until the end of August 2013.