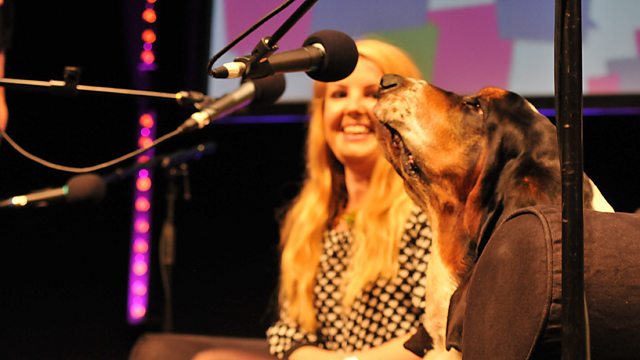 Janice Forsyth is live from Edinburgh with an eager audience and highlights from the festivals.

Today Janice is joined by Scroobius Pip, the man whose spoken word poetry can command an audience of thousands.

Folk songstress Rachel Sermanni is just back in Scotland after a Canadian tour - she performs live in the BBC big tent for Janice. And there's music from rockabilly blues musical The Bloody Ballad.

Theatre director Cora Bissett set a selection of artists a challenge - to write a song or a scene which is set somewhere in Scotland between the hours of midnight and 4am. The result is an ambitious multimedia music and theatre performance called Whatever Gets You Through the Night. Cora talks about the show and is joined by Scottish Album of the Year winning guitarist RM Hubbert for a song.

Kieran Hurley and AJ Taudevin talk about their play Chalk Farm, inspired by the 2011 London riots.

Victoria Melody is a performance artist who entered her bassett hound Major Tom into dog shows while she herself tried beauty pageants. Victoria and Major Tom join Janice onstage to talk about the show she's created from their experiences.

Plus comedian, journalist and mum of three Viv Groskop, whose comedy career began when she set herself the challenge of performing 100 gigs in 100 days; and songs from satirist Katie Goodman.