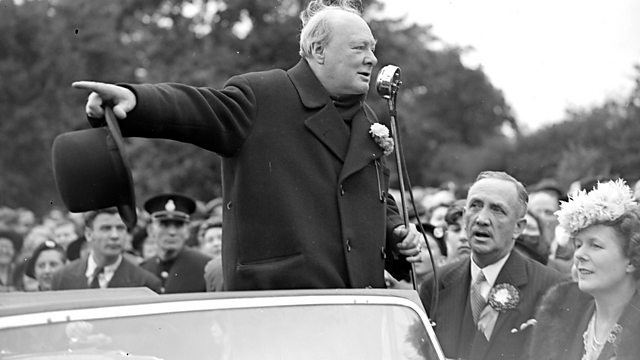 Clement Attlee once claimed that Churchill led Britain to victory in the Second World War through his words. But what influenced these words and their delivery?

The answer lies in a wooden cabinet containing not only Churchill's private collection of gramophone records, but also rare recordings of his unknown speeches.

In this Archive on 4, historian Andrew Roberts joins archivists, historians, musicians, even Churchill's own family, to discover how these rapidly disintegrating discs - some of them over a hundred years old - offer new clues about his oratorical style. Their survival depends on the fast action of the Cambridge archivists in a race against time to digitise them, before they quite literally turn to dust.

The work has turned up some surprising revelations - including a glimpse into Churchill's very own desert island discs. The apparently unmusical Churchill turns out to be someone who treasures songs of satire, humour and intense patriotism. We discover recordings of black swans enjoyed by a nature loving Churchill we rarely see, and then there are those fascinating newly discovered recordings of Churchill's own voice - including the first known recording of him, from the early 20th century.

From these records, Andrew Roberts gleans valuable insights into that famous titan of British oratory - how it was not just his words, but his unique musical delivery that came to reflect and even embody the hopes of a nation.

Crime of the Century