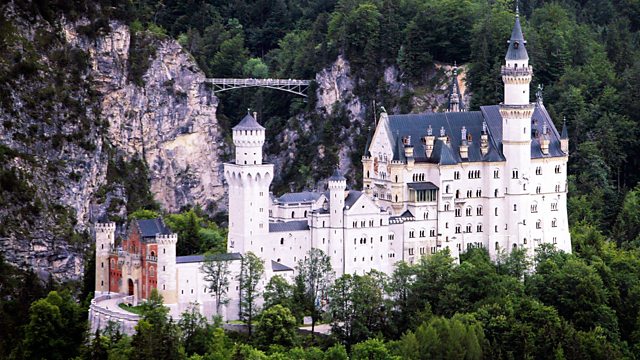 The Fairytale Castles of King Ludwig II with Dan Cruickshank

Dan Cruickshank looks at the extravagant 19th-century castles and palaces of King Ludwig II of Bavaria, believing them to be the work of an architectural genius ahead of his time.

Ludwig II of Bavaria, more commonly known by his nicknames the Swan King or the Dream King, is a legendary figure - the handsome boy-king, loved by his people, betrayed by his cabinet and found dead in tragic and mysterious circumstances. He spent his life in pursuit of the ideal of beauty, an ideal that found expression in three of the most extraordinary, ornate architectural schemes imaginable - the castle of Neuschwanstein and the palaces of Linderhof and Herrenchiemsee. Today, these three buildings are among Germany's biggest tourist attractions.

In this documentary, Dan Cruickshank explores the rich aesthetic of Ludwig II - from the mock-medievalism of Neuschwanstein, the iconic fairytale castle that became the inspiration for the one in Walt Disney's Sleeping Beauty, to the rich Baroque splendour of Herrenchiemsee, Ludwig's answer to Versailles. Dan argues that Ludwig's castles are more than flamboyant kitsch and are, in fact, the key to unravelling the eternal enigma of Ludwig II.