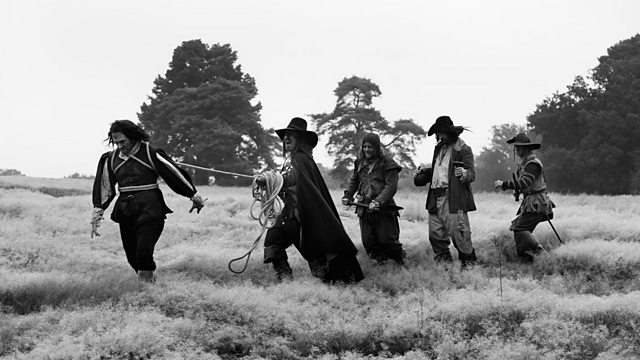 Ben Wheatley on A Field in England; Mark Gatiss on TV classics on the big screen

Sightseers director Ben Wheatley talks to Matthew Sweet about his new civil war film, A Field in England which is the first UK film to be available in the cinema, on DVD and Blu Ray, on television and download simultaneously. He describes his fascination with periods of revolution and the European sense of history.
Sofia Coppola explores celebrity emulation that leads to house-breaking in her film The Bling Ring and explains why the designer gear these teenagers steal holds no attraction for her.
Almost 40 years after the release of Werner Herzog's The Enigma of Kaspar Hauser, it's back, showing at the British Film Institute and selected cinemas nationwide. It's based on the story of a youth found in 1828 in a German town, barely able to speak or walk having been kept in a cellar since birth. Critics Mike Catto and Leslie Felperin, whose son has autism, look at how this film plays now and assess the figure of the idiot savant and other outsiders in modern cinema.
And the writer and comedian Mark Gatiss discusses the big screen films spawned by classic TV shows from the 1960s and 70s. He begins with Steptoe and Son and its dark, bleak, movie incarnation. Next week, he tackles Are You Being Served?

This Is the End; The Act of Killing; Stories We Tell; The Brood