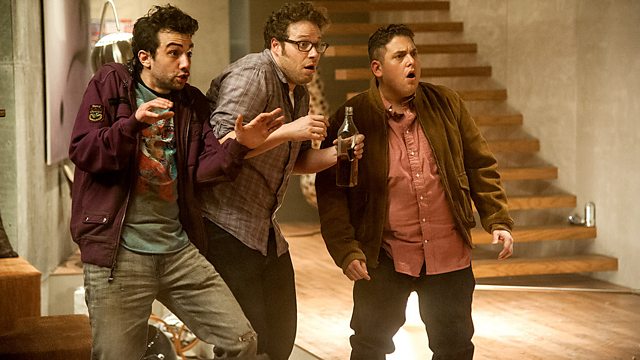 This Is the End; Jonathan Dee; Lowry; Brian Aldiss

Lowry and the Painting of Modern Life, a new exhibition at Tate Britain, compares Lancashire born artist L S Lowry with the French tradition of the time and argues for his pre-eminence as a painter of the industrial city. Rachel Cooke reviews.

The writer Jonathan Dee, whose novel The Privileges was shortlisted for the Pulitzer Prize for Fiction, discusses his latest work. A Thousand Pardons explores what it means to apologise and the tradition of apology and forgiveness in public life. Jonathan Dee talks about receiving an angry e-mail from a reader shocked by the novel's dramatic twist.

This is the End is the latest collaboration from Evan Goldberg and Seth Rogen, following Superbad and Pineapple Express. It's set at a glamorous party, where James Franco, Seth Rogen and Jonah Hill play versions of themselves, with cameos from stars including Rihanna and Emma Watson. The festivities are in full swing when the apocalypse arrives. Viv Groskop reviews.

The writer Brian Aldiss, best known for his science fiction, chooses his Cultural Exchange. He explains how The Journal of Marie Bashkirtseff, the diary of a young artist written between 1860 and 1884, influenced him when he discovered it as a young boy.

Scared To Get Happy is a 5 CD, 134 track box set which charts the history of indie music from 1980 to 1990. An exhaustive collection, it includes tracks from famous names such as The Stone Roses, Primal Scream and Lloyd Cole and the Commotions as well as less familiar groups like Trixie's Big Red Motorbike and Tallulah Gosh, featuring 2013 Turner Prize winner Elizabeth Price. Andrew Collins traces the sound that defined a generation.

This Is The End

This Is The End is released in UK cinemas on 28th June, certificate 15.

Lowry and the Painting of Modern Life is on at Tate Britain in London from 26th June - 20th October.

Unseen Lowry: Paintings and Drawings from LS Lowry’s Home, an exhibition of works by Lowry which have never been seen in public before, is on the The Lowry in Salford, Manchester, until 29th September.

A Thousand Pardons by Jonathan Dee is available now, published by Corsair.

Scared To Get Happy

Scared To Get Happy - A Story Of Indie-Pop 1980-1989 is available now, released by Cherry Red Records.