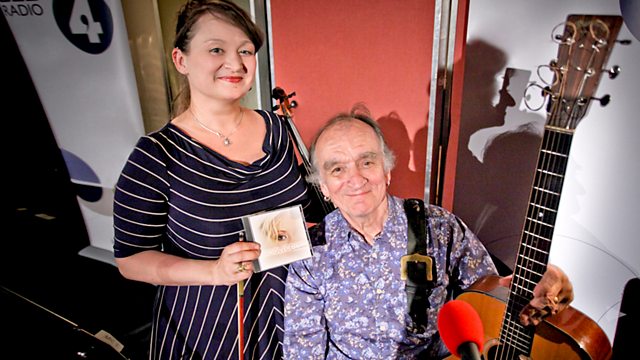 Eliza and her father Martin talk to John Wilson about their critically celebrated 2002 folk album, Anglicana. From June 2013.

John Wilson continues with the second series of Mastertapes, in which he talks to leading performers and songwriters about the album that made them or changed them. Recorded in front of a live audience at the BBC's iconic Maida Vale Studios. Each edition includes two episodes, with John initially quizzing the artist about the album in question, and then, in the B-side, the audience puts the questions. Both editions feature exclusive live performances.

Together Eliza Carthy and her parents Martin Carthy and Norma Waterson have consistently breathed new life and vitality into English folk music. Martin Carthy MBE has influenced the likes of Bob Dylan and Paul Simon with his interpretations of the traditional music of these shores. His guitar playing continues to inspire artists in all genres and he continues to tour and record on his own, and when working with wife Norma Waterson and daughter Eliza Carthy as Waterson:Carthy.

Eliza Carthy has continued to expand the legacy of her parents work, reinterpreting and reinvigorating English folk in her own unique style. Her fiddle playing is in a class of its own and throughout her career she has experimented with unusual musical collaborations, including the hugely successful Imagined Village project. "Anglicana" was released in 2002 and gained Eliza her second Mercury nomination. It features both Martin Carthy and her mother Norma Waterson and was hailed as a new definition of what it means to be English in the 21st Century.

Eliza and Martin Carthy, came to the BBC Maida Vale studios to discuss the making of "Anglicana", their constantly evolving interpretations of traditional folk songs and their work together with Norma Waterson as Waterson:Carthy.
.

See all clips from Eliza and Martin Carthy (A-Side) (2)