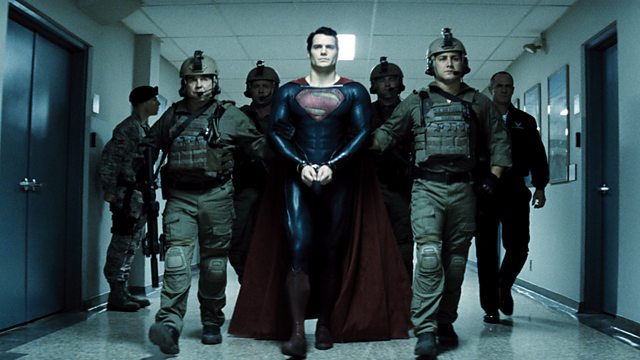 Francine Stock talks to director Zack Snyder about the latest Superman film, Man of Steel. Plus the story behind low-budget UK documentary Moo Man, about a maverick dairy farmer.

Francine Stock talks to Zack Snyder, director of the latest Superman film, Man of Steel, starring Henry Cavill, Amy Adams, Russell Crowe and Kevin Costner. A young boy learns that he has extraordinary powers and is not of this Earth. As a young man, he journeys to discover where he came from and what he was sent here to do. But the hero in him must emerge if he is to save the world from annihilation and become the symbol of hope for all mankind.

Hans Zimmer - whose credits include the Batman trilogy - provides Man of Steel's musical score, but how has superhero music evolved over the decades? Film composer Neil Brand tracks the evolution of the superhero soundtrack from the 'positive' Superman of John Williams, to the 'dark' Man of Steel of Hans Zimmer, by way of Poledorous's Robocop and Kamen's X-Men.

Moo Man is a low budget British documentary following a year in the life of maverick dairy farmer Steve Hook - and the first British film to be kickstarter funded. If they reach their target, film making duo Andy Heathcote and Heike Bachelier will be able to secure Moo Man the marketing budget it needs to reach a wider audience.

Austrian film director Ulrich Seidl's films appeal to a particular kind of indie, European art cinema fan base. Critics Sandra Hebron and Ryan Gilbey discuss his latest offering, the Paradise trilogy, about three women in one family who take three very different vacations; from searching for love, and more, on a Kenyan beach, to working as a Catholic missionary to going on a diet camp for teenagers.

Before Midnight; World War Z; Like Someone in Love; The Sea