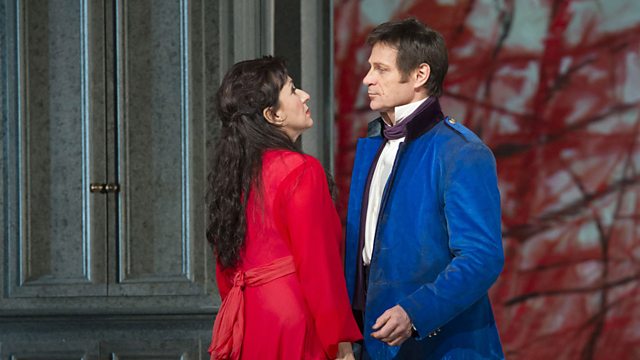 Launching our Royal Opera House, Covent Garden season Sara Mohr-Pietsch introduces a performance of Tchaikovsky's tragic opera based on Pushkin's verse novel. Stuck on a country estate, Tatyana shuns the local festivities, preferring to immerse herself in romantic novels. When a stranger, Onegin, arrives, she takes him on a walk and falls in love with him. Onegin spurns her interest after he receives a letter from her. Years pass and Tatyana marries another man, but when she meets Onegin some years later, he realises the mistake he made and though Tatyana admits to being in love with him still, she refuses to leave her husband.

Recorded earlier this year at the Royal Opera House, Covent Garden, this is Kasper Holten's first production for the ROH since taking over as Director of Opera. Krassimira Stoyanova and Simon Keenlyside star as the doomed lovers, and the young British conductor Robin Ticciati conducts.