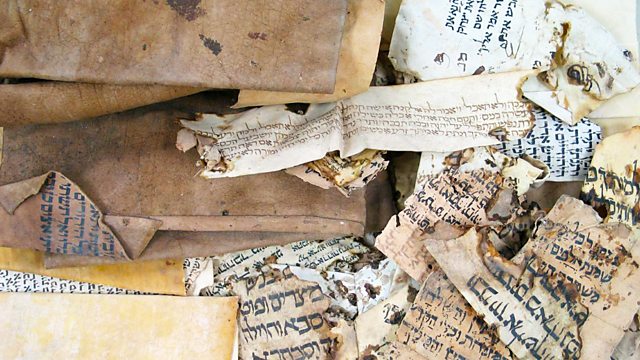 The Essay Life in Fragments: Stories from the Cairo Genizah
Episode 5 of 5

Gabriele Ferrario of the Genizah Research Unit reveals a secret side to life in medieval Cairo: one governed by alchemy and magic.

Gabriele Ferrario of the Genizah Research Unit reveals the most secretive side of the Genizah collection: the manuscripts relating to alchemy and magic.

The Cairo Genizah is a treasure trove of manuscripts from the Ben Ezra synagogue in Old Cairo that portrays over 800 years of community life. Rediscovered in the 19th century, this vast communal paper-bin contained hundreds upon thousands of scraps of rag-paper and parchment - an unedited archive of prayers, letters, poems, magical spells, alchemical recipes, children's exercise books, divorce deeds and pre-nuptial agreements that paints a lively and intimate picture of daily medieval life in Egypt and the Eastern Mediterranean.

Three Lives—Life in Fragments: Stories from the Cairo Genizah