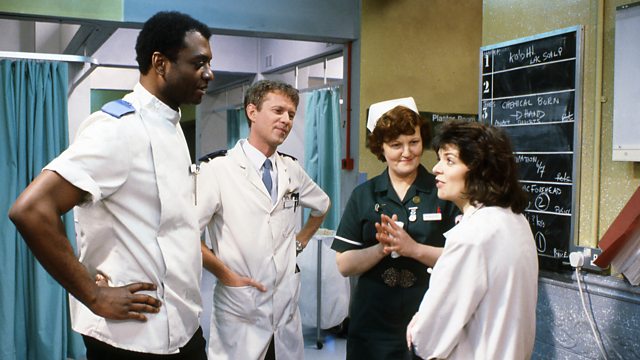 Britain in a Box Series 6
Episode 3 of 3

Paul Jackson visits the purpose-built TV studios of the longest running medical drama in the world. Born out of necessity (as a weapon in the weekly battle for audience-share on Saturday nights) "Casualty" has become one of BBC 1's most consistent performers.

Series in celebrating innovative TV programmes, whilst using them as a window on a particular period in our cultural and social history.

Paul discusses the programme's origins with the show's creators (Jeremy Brock and Paul Unwin) and the people who commissioned it and stood by it during its lean years (Lord Grade and Jonathan Powell). He assesses how much it has changed in its long life.

Featuring cast members Patrick Robinson (Ash) and the ever-present Derek Thompson who from the very first episode played Charlie Fairhead. Plus Pete Salt, the medical consultant on whom Charlie is based) and series producer Nikki Wilson.

Paul also gauges the future of the programme with the head of BBC 1's scheduling, Dan McGolpin.