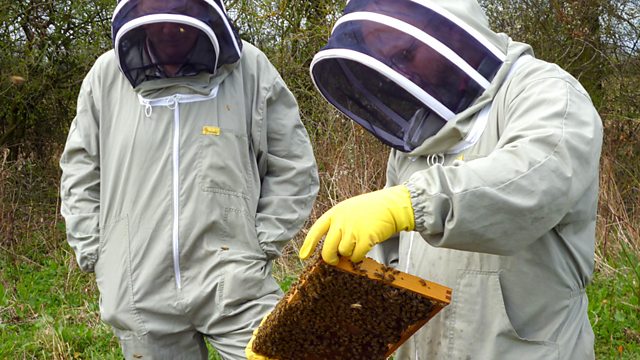 Tom Heap goes in search of the facts behind the debate about how much damage modern pesticides are doing to honey bees and other essential pollinating insects.

Much heat has been generated about about modern pesticides called neonicotinoids.
Their supporters - the companies which make them, the farmers who use them and the Department for Environment, Food and Rural Affairs - say they are vital to protect crops and boost yields in a hungry world. They say jobs would be threatened in a big way if they were outlawed and that there is no scientific proof that they are harming pollinating insects which are also vital to agriculture.

On the other side of the debate are environment campaigners, scientists, the European Food Safety Authority, the European Commission and a House of Commons select committee. They say there is so much evidence that neonicotinoids kill bees and other useful insects that their use in farms and gardens cannot be justified. Beekeepers are divided, some fearing that the alternative chemicals would cause even more damage, some saying that the other threats to bees - disease and loss of habitat - are far more serious. Some even challenge the whole notion that bees are suffering a serious decline.

For Costing the Earth, Tom Heap goes into the fields and hedgerows of England - and into the laboratory of the country's only Professor of Apiculture - to sort spin from science and facts from campaign catchphrases. He also hears from scientists and experts on the global health of pollinating insects and the crops that depend on them.

The Cost of Cruising