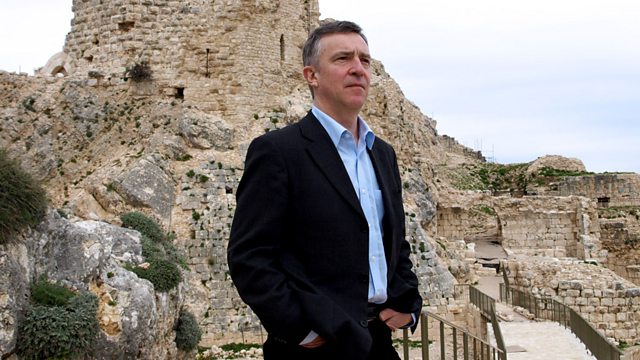 In a Prince's Footsteps
Episode 1 of 10

John McCarthy travels to Egypt to consider pictures of the Prince's party gathered in front of the Pyramids. From May 2013.

In 1862 Albert, Prince of Wales, toured the Middle East. At the time it was still predominantly controlled by the Ottoman Empire. As he travelled, his photographer Francis Bedford kept a detailed photographic record of the trip. In this series John McCarthy revisits the scenes of Bedford's photographs - Egypt, Israel and the Palestinian Territories, Lebanon, Syria, Turkey and Greece. He considers how the immediate physical, political and social landscape has evolved during the intervening 150 years.

Some of Bedford's photographs are of widely known locations - the Pyramids at Giza, the Mount of Olives, the temples at Baalbek, the Acropolis - others are of remote hilltops and apparently random buildings, scenes without any obvious significance. Both however hold fascinating and unexpected tales and insight.

The series will reflect on the rise and fall of empires - the Ottoman, British and French all play their part in these stories. They are now all gone, but the world's powers still seek to influence the politics of the region.

In each episode John McCarthy focusses on two of Bedford's original photographs, revisiting the sites and taking his own pictures of the same scenes today.

In the opening programme, John travels to Egypt to consider pictures of the Prince's party gathered in front of the Pyramids of Khufu and Khafre at Giza, and a broader Cairo picture taken from a key minaret in the city.

See all episodes from In a Prince's Footsteps

This mosque and madrasa complex was built in 1356 by one of the most powerful Emirs of the time. A madrasa is an educational institution. The term is usually applied to schools that teach the Islamic religion.

The Prince of Wales and his entourage on camels posing for camera in front of Pyramid of Cheops and Pyramid of Cephrenes, Giza, Cairo. The Prince is seated on the camel fifth from the left. The man in the white suit with a cigar, gazing up at the Prince, is Joseph Kanné, the Queen’s courier, who was responsible for all the practical arrangements ... 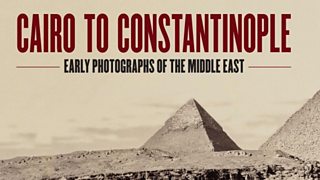