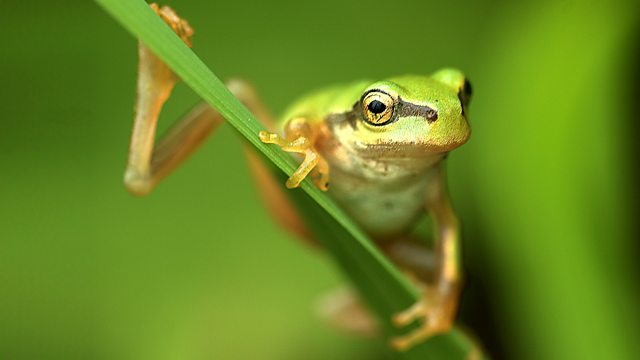 Forty per cent of the world's amphibian species are at risk of extinction. Tom Heap asks if people know or care enough to save them from dying out.

Frogs, toads and newts are becoming a less frequent sight in our ponds and gardens. Globally 40% of amphibians - almost 2000 species - are threatened with extinction according to the IUCN red list. Some scientists even say we're on the verge of the 6th mass extinction. Yet with things at such an alarming state Tom Heap asks what's being done to save these creatures and if it's too little too late?

Amphibians are a key part of the food chain but not only do they control less favoured bugs, they have also been described as 'hopping pharmacies' carrying important chemical compounds on their skin which have been used for medicines. If they disappear so does that link.

Tom hears about the different factors which are impacting on numbers - including habitat loss, climate change and diseases such as chytrid fungus and ranavirus. Andrew Blaustein at the University of Oregon is currently doing research to find out why some species are more vulnerable to chytrid than others but has also found parasites causing mutations in frogs nearby - including some with up to 15 limbs.

Meanwhile, of the UK's seven native amphibian species, one- the pool frog - has already died out. Tom travels to the secret location where they've been reintroduced from Sweden to find out how well they're doing and what can be learnt from this near-miss. Tom also gets his hands dirty on toad patrol, helping them cross busy roads as they come out of hibernation and return to their ponds for breeding. As he asks motorists to apply their brakes he also asks just how much this will do to halt their decline.

Fish - The Next Fight