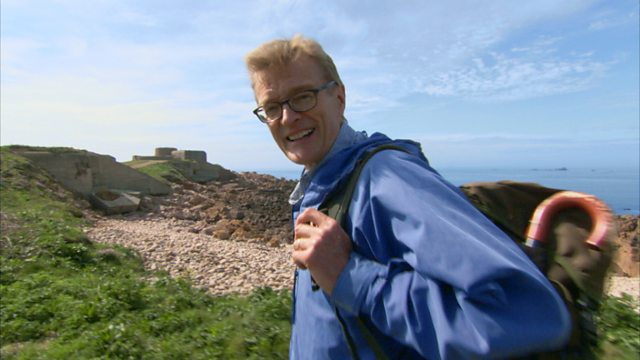 Invaders of the Isles

Coast reveals stories of invasions around the British Isles, including the German occupation of Guernsey in WWII and the often forgotten Zeppelin blitz of WWI.

Revealing surprising stories of invasions around the British Isles.

Nick Crane explores how the remarkable history of Guernsey reveals both the risks and rewards of invasion. What will Nick discover as he opens up a German bunker that has been sealed since the end of the war? Nick also hears very different stories of the occupation from two survivors: a girl evacuated to England who became a pen pal of Eleanor Roosevelt, and a boy left on Guernsey who played dangerous pranks on the invading German army. Nick also revisits the Napoleonic wars and learns how the islanders turned threat of invasion into a moneymaking opportunity - the Guernsey privateers.

Tessa Dunlop visits Norfolk to relive the forgotten Zeppelin blitz on Britain during the First World War, which began at Great Yarmouth in January 1915 when the first Britons were killed in an air raid. Tessa explores how we had to invent the aircraft carrier, and the flaming 'incendiary' bullet to foil the deadly aerial invaders. Tessa recreates the astonishing dogfight that brought the blitz to an end in 1918, when pilot Egbert Cadbury, heir to the famous chocolate empire, shot down the fearsome 'Super Zeppelin'.

Ruth Goodman joins the friendly invasion of the Isle of Man by thousands of bikers for the annual TT races. How did this small island become home to the most dangerous road race on earth? Ruth discovers that the answer lies with the introduction of speed limits on British roads over a century ago.

On a tiny rocky outcrop in seas off western Scotland, Andy Torbet encounters remarkable animal invaders - water voles who are usually confined to mainland Britain. The Coast team also visits the remote Scottish isle of Stroma, which was abandoned following the invasion of the modern world.

See all clips from Invaders of the Isles (3)