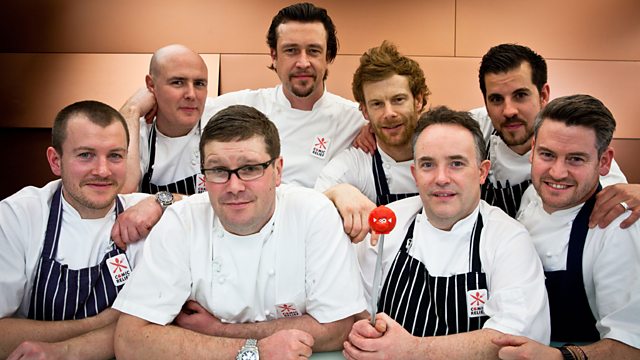 It is the climax of the competition as the winning chefs cook at the Comic Relief Banquet at the Royal Albert Hall. But it is not all plain sailing.

It is finals week and 24 of the nation's finest chefs have been whittled down to just eight. Over the course of four hour-long shows they will battle it out in the kitchen for the chance to get a dish to the Comic Relief Banquet.

The brief called for the chefs to bring out their funny sides. Their food not only had to be gastronomic, but a performance on a plate, witty and fun. Their prize: to get a dish on the menu at a special banquet at the Royal Albert Hall celebrating 25 years of Comic Relief's Red Nose Day.

The charity has raised more than 800 million pounds, changing the lives of people in both Africa and the UK through the power of entertainment.

It is the climax of the competition as the winning chefs cook at the Comic Relief Banquet at the Royal Albert Hall. Special guest and co-founder of the charity Richard Curtis welcomes guests - the unsung heroes of charity work, as well as those who have benefited from their help and some of the celebrities who have inspired us to do something funny for money. But it is not plain sailing - the chefs have to contend with getting into the kitchen late. The dining gallery is five floors from the kitchen and then there is the small matter of a broken down lift. 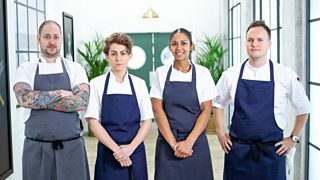