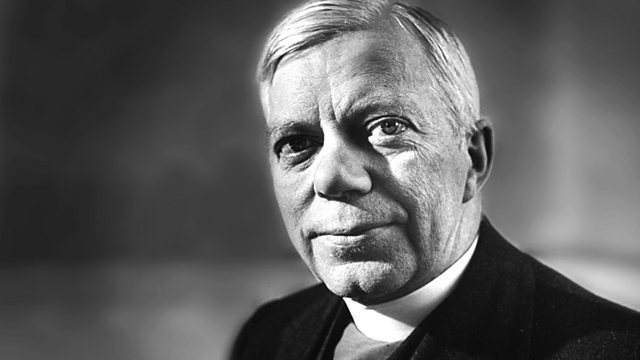 "I remember seeing him sitting on the bishops' bench, and I went to him and said, George, I believe you are going to make a speech. He replied, yes I am. I said, George, there isn't a soul in this House who doesn't wish you wouldn't make the speech ..." Lord Woolton, 1944

George Bell, Bishop of Chichester, was the most famous churchman of his day. His brave speech attacking the allies' bombing tactics in World War Two is justly remembered here by Peter Hitchens as one of the clearest, most coherent and measured statements ever made about the war. But his contemporaries did not see it quite the same way. "Don't let's be beastly to the Germans," sang Noel Coward, in part inspired by Bell's anti-war stance.

But George Bell was not a pacifist - he just believed that the British should not be as barbaric, as he saw it, as the Nazis who had provoked the war. In his speech Bell said, "... to justify methods inhumane in themselves by arguments of expediency smacks of the Nazi philosophy that Might is Right." The controversy surrounding the tactics of bomber command remain alive today.

Peter Hitchens is a columnist on the Mail on Sunday, and was once described by a contemporary as a 'deeply compassionate man with the air of a propher about him; and like all prophets, doomed to be scorned by so many'. The programme discussion also includes Andrew Chandler, director of the George Bell Institute; and the presenter Matthew Parris.