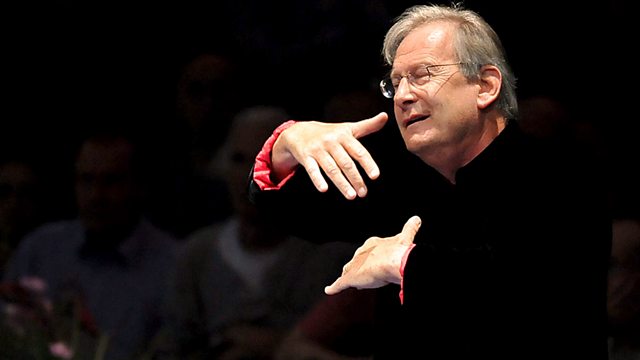 Conductor John Eliot Gardiner is joined by leading soloists, the Monteverdi Choir and the English Baroque Soloists in a celebration of the music of Bach.

The Baroque Spring Season concludes with an afternoon and evening of music by J S Bach live from Sir John Eliot Gardiner's Bach Marathon at the Royal Albert Hall in London. John Eliot celebrates his 70th birthday this month and over nine hours he conducts his own Monteverdi Choir and English Baroque Soloists and introduces leading performers in Bach chamber and solo works. Threaded through the day are interviews and round-table discussions with specialists, including American writer Paul Elie, neuroscientist Raymond Tallis, and psychologist Tamar Pincus.

John Eliot recalls that he grew up literally "under the Cantor's gaze", since the most important portrait of Bach (by EG Haussmann, 1748) hung in his parents' house during his childhood, having been entrusted to them for safekeeping by a refugee fleeing from Nazi Germany during the Second World War. His fascination with the music of the great composer dates from those years when he learnt by heart the treble parts of all Bach's motets, and then went on to conduct them for the first time in his teens. It has developed throughout his life, often marking milestones in his career, most notably when he celebrated the new Millennium with the epic Bach Cantata Pilgrimage.

1.20: John Eliot introduces the day from the stage of the Royal Albert Hall.

Alban Gerhardt plays one of the best-known compositions ever written for cello.

4.10: The distinguished organist and scholar, Stephen Farr surveys some of the organs of Bach's own time in search of the elusive 'Bach Organ.' Can this be found in the imposing instruments of North Germany, once the pride of the cities of the Hanseatic League, or maybe in the more modestly scaled instruments of Thuringia's parish churches.

John Eliot leads the Monteverdi Choir, the English Baroque Soloists and the Royal Albert Hall audience in this early cantata which is remarkable for its extreme emotional intensity.

Known the world over as a violinist of exceptional versatility, Viktoria Mullova takes on Bach's Partita including the Chaconne - a high-wire balancing act of musicality and technique.

Sir John Eliot Gardiner reflects, "Several of the big moments in my life seem to be linked in some way with the music of Bach, and 2013 is no exception. The enormous appeal of his music today extends to an astonishing variety of people from all walks of life. To spend a whole day in the company of distinguished fellow musicians, writers and scientists to perform, discuss and enjoy the music of this supreme composer whose music lights our lives more than 300 years after his death, is absolutely the best birthday present I could wish for.".