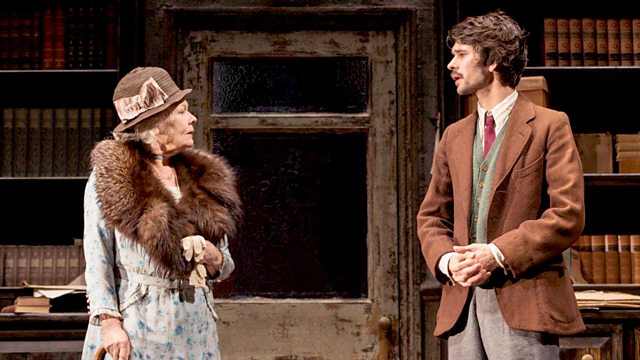 Including an interview with Skyfall writer John Logan, a review of Kristin Scott Thomas in Francis Ozon's film In The House and Madness frontman Suggs on his new one-man show.

Playwright John Logan is also known as the writer of award-winning films like Gladiator, Skyfall and Martin Scorsese's The Aviator. This week he returns to the London stage with Peter And Alice, based on a real-life meeting between the people who inspired two classics of children's fiction, Alice In Wonderland and Peter Pan - Alice Liddell Hargreaves and Peter Llewellyn Davies, played by Judi Dench and Ben Wishaw.

Kristin Scott Thomas stars in Francois Ozon's latest film, In the House. It's a comedy about a school student and his literature teacher. The boy displays a rare spark of creative-writing talent and his stories hook the teacher and his wife with devastating results, blurring the lines between fact and fiction. Rachel Cooke reviews.

Suggs, the lead singer of Madness, is about to embark on a UK tour in which he looks back over his life, from his birth in Hastings to the disappearance of his father and his time with the band. Suggs, aka Graham McPherson, discusses the show and the continuing success of Madness who first formed in 1976.

Danny Boyle's Trance, Gillian Lynne, The NHS in a Day