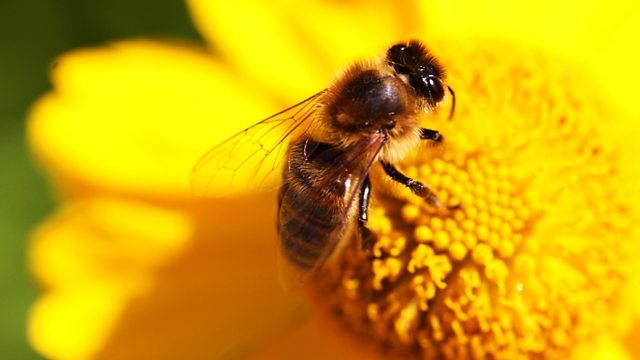 On the Trail of the American Honeybee

Dr Adam Hart meets the migratory bee keepers of America as they travel to the annual almond bloom in California, the largest crop pollination event on Earth.

Dr Adam Hart meets the migratory bee keepers of America as they travel to the annual Almond bloom in California, the largest single pollination event on Earth.

Each year, from the end of February to early March, a thousand square miles of almond orchards bloom in unison, turning much of California's Central Valley white. 75 per cent of the world's almonds come from these orchards and to ensure successful pollination, farmers need bees - a lot of bees. Around 1.5 million hives, over 30 billion bees, swarm over the bloom for three weeks a year, before they're packed up and driven on to pastures new, be it Washington Apples, Maine Cranberries or Florida Citrus. Welcome to the extraordinary world of migratory beekeeping. This isn't about the honey, it's about the money.

David Mendes is the 'marathon man' of migratory beekeeping. Every year, he moves 15-20 thousand hives from Florida to California, on dozens of flat-bed trucks, at a cost of half a million dollars. It's the start of a ten-thousand mile journey which entails many risks, not least the possibility of spilt bee hives. Beset by viral diseases, pesticides, starvation and the ever-present threat of colony collapse disorder or CCD, even a vigilant bee-keeper can expect 20-30 per cent of their hives to die-off in any given year. So why bother? "This is what we do" says John Miller, "I was born to keep bees in a box". Miller's great-grandfather invented migratory beekeeping, which thanks to increasing demands from farmers, can earn even small to medium-sized keepers, millions of dollars just from almonds alone.

As Adam discovers on his 1000-mile journey through the Central Valley, life is far from honeyed for keepers or their bees. The industrial nature of migratory beekeeping in the US, means many are forced to split and even kill off some their own colonies in order to create younger, more productive ones, in a process referred to as "nuking the hive". Over thirty per cent of American agriculture is dependent on pollination but once the bloom is over, most beekeepers struggle to find suitably diverse forage for their beloved bees, in a world of monoculture that has become America's farming reality.